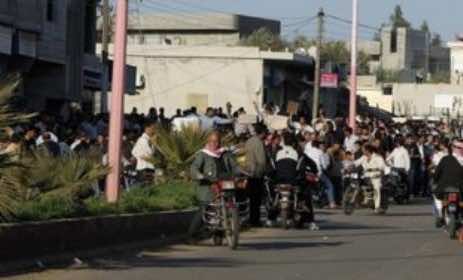 Syrian troops killed more than 20 people in an assault on the flashpoint central city of Hama that prompted US calls for an immediate pullback, human rights activists said on Wednesday.

Troops also wounded more than 80 people as they pushed through improvised roadblocks put up by residents after massive anti-government protests in the city of some 800,000 people, the National Organisation for Human Rights said.

It said at least 22 people were killed on Tuesday, while the Syrian Observatory for Human Rights said later on Wednesday that at least 23 had been killed in 24 hours.

“The wounded are being treated in two hospitals in Hama,” the National Organisation’s chairman Ammar Qurabi told AFP in Nicosia, adding that troops had entered Al-Hurani hospital.

London-based watchdog Amnesty International accused the authorities of committing crimes against humanity in its deadly crackdown on the unprecedented anti-government protests that have swept the country since mid-March.

According to the Syrian Observatory, the body of one of those killed in Tuesday’s assault was dumped in the Orontes (Assi) river in Hama, which is famous for its ancient watermills.

“Security forces have responded to protests with the brutality that’s become familiar over the past several months.”

Residents, meanwhile, have “mobilised. They’re prepared to die to defend the city if need be rather than allow the army to enter,” said Rami Abdel Rahman, head of the London-based Syrian Observatory.

Another activist insisted that Hama, where as many as 500,000 people took to the streets for a demonstration last Friday against Assad’s regime, was putting up a “100 percent peaceful” resistance.

But Damascus said that its troops had suffered casualties at the hands of armed groups in the city.

“The security forces, which intervened to restore order in Hama where there have been acts of sabotage… were attacked with Molotov cocktails by armed groups,” the official SANA news agency said.

“One security force member was killed and 13 wounded in the clashes. Some of the gunmen were killed and others wounded.”

The US State Department said it too had no evidence that the protests had been anything but peaceful and called on the Syrian government to withdraw its troops from Hama.

“We urge the government of Syria to immediately halt its intimidation and arrest campaign, to pull its security forces back from Hama and other cities, and to allow Syrians to express their opinions freely,” it said.

“The government of Syria claims that it’s interested in dialogue at the same time that it is attacking and massing forces in Hama, where demonstrations have been nothing but peaceful.”

Since security forces gunned down 48 protesters in the city on June 3, Hama has escaped the clutches of the regime, activists say. The next day, more than 100,000 mourners were reported to have taken part in their funerals.

Hama was the scene of a 1982 bloodbath in which an estimated 20,000 people were killed when the army crushed an Islamist revolt against the rule of the president’s predecessor and late father, Hafez al-Assad.

In a report released on Wednesday, Amnesty made allegations of torture, deaths in custody, and arbitrary detention during an army assault that lasted several days in May on Tall Kalakh, a protest centre near the Lebanese border.

“Amnesty International considers that crimes committed in Tall Kalakh amount to crimes against humanity,” it said, calling on the UN Security Council to refer the allegations to prosecutors of the International Criminal Court.

Syrian state television, meanwhile, broadcast footage of a huge pro-regime rally on Wednesday in the northern city of Aleppo where “hundreds of thousands” hoisted an immense Syrian flag.

Human rights groups say that more than 1,300 civilians have been killed and thousands more arrested since the protests started nearly four month ago.