Morocco World News
Home News Morocco The Experience of Voting on the Moroccan Constitution in the Greater Washington... 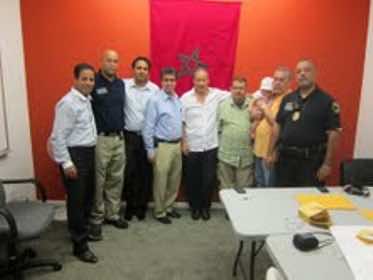 From July 1st to the 3rd, many Moroccan expatriates who elected to partake in the referendum on the new Moroccan constitution had the opportunity to vote. This is an effort to involve them in the country’s affairs and recognize them as relevant citizens.  Moroccans in the greater Washington, D.C. area had two places to cast their vote: the Moroccan embassy in Washington, D.C. and the Moroccan American Community Organization in Falls Church, VA., a few miles outside the district. I visited the latter location.

The voting station is located inside a building clear to spot from the main road. Going in via the main street entrance, you are greeted with a sign that directs you to the first floor.  In reality, the polling station is on the ground level relative to that specific entrance.  You may get lost but you will figure it out fairly quickly.  There is more than one entrance to this building and the polling station could be on the first floor relative to a different entrance.

As soon as you enter the office, you quickly realize there will be zero tolerance for any kind of disturbance.  Thre­e imposing Moroccan security guards fully equipped with gear that includes handcuffs, badges, walkie-talkies, what looks like guns, and pepper spray, greet you.  If there is no one voting, they ask you to proceed to the polling room otherwise you are offered a seat at an air-conditioned waiting area.  Cold potable water is available free of charge.

Once your turn comes, you proceed to a voting room that is manned by four individuals; one a representative of the embassy and the person in charge, and three observers/poll volunteers.  After you are greeted again, one of them asks for your Moroccan ID card or passport, or consulate card.  They also ask if you are registered with the embassy for the purpose of speeding the process of identification.  If you are not registered with the embassy, any Moroccan government-issued ID document would do.  According to an observer, one person was not allowed to cast his vote because he had no form of Moroccan ID.  American ID cards were not acceptable; no exceptions.  It can get tense.

Once they take your information, they instruct you to take an empty envelope stamped with the Moroccan logo and two ballots; one says Yes and the other says No from stacks on the table.  They then explain that you need to choose your ballot, put it in the designated envelop, and take the unused­­ ballot with you.   They show you a transparent ballot box.  It is displayed in plain sight and locked with two locks, one in each side where you would drop your envelope.  They also point you to a voting booth.  Your privacy is guaranteed.  Once you come out of voting booth, they point you to the ballot box again.  All questions relevant to the process are entertained.

The process is efficient and the experience is pleasant. Turn out, ballot-counting, and results– well those are another story.

Jamal Laoudi is a Moroccan national. He received a Bachelor’s of Science in Computer Science and a Bachelor’s of Art in Economics.  He is employed with the Adelphi Research Laboratory and serves as an independent consultant in Computational Linguistics.   He contributes to various news and community portals including Aljazeeratalk.net, Moroccoworldnews.com, and wafin.com. “