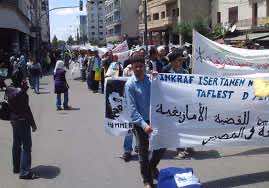 For the nation’s indigenous Berber population, it’s a mixed blessing.

As part of the constitutional reform, Tamzight, the Berber’s language, was raised from national to official language status, meaning it will now be taught in Moroccan schools along with Modern Standard Arabic.

Morocco‘s Berbers have long been engaged in a battle to make their language official. Pre-dating the Arabo-Islamic invasion of North Africa, many believe the language is the true first language of the Maghreb.

Although many Berbers are saying they’ve won a major battle against cultural marginalization, others say the gesture won’t help their disenfranchisement from what they believe is an Arab-dominated government.

This is a symbolic measure. But there are still those in government who have long worked against the integration of Amazighs (the Berber word for themselves) politically and these measures won’t do much about them,” said Ahmed Adghirni, the front man for the Berber struggle in Morocco, in a phone interview from Rabat, Morocco’s capital.