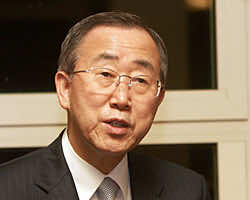 The U.N. secretary-general is accusing Israeli soldiers of using excessive force by firing live ammunition at unarmed Lebanese demonstrators in May.

The demonstrators were trying to breach a border fence on May 15. The Lebanese Armed Forces reported that seven people died and 111 were injured.

Ban Ki-moon said a preliminary report by the U.N. peacekeeping mission in Lebanon also accused the demonstrators who threw stones and petrol bombs of carrying out “a provocative and violent act.”

In a report to the Security Council circulated Wednesday, Ban said both the Israelis and the demonstrators violated the U.N. resolution that ended the Israeli-Hezbollah war in 2006.

Ban called on Israeli forces not to use live fire in such situations and on Lebanese forces to prevent such incidents.