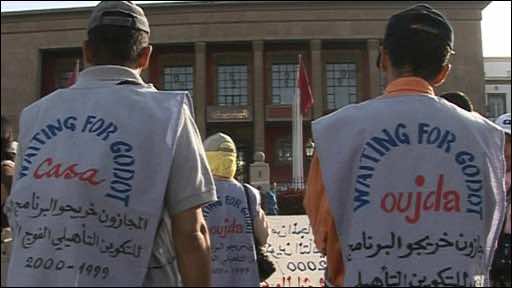 Government officials could not immediately be reached for comment, while a spokesman for the state-run phosphate monopoly, OCP, said there were protests, but stopped short of calling them riots.

Riots broke out in March in the same Khouribga province, home to the country’s biggest phosphate mines.Moroccois the world’s top phosphate reserves holder and a key supplier of fertilisers and phosphoric acid.

Hajjaj Assal, who heads the local section of the country’s main human rights group, AMDH, said 30 protesters had been arrested since Tuesday and some of them were put on trial on Thursday.

“Riots are still ongoing in the Lebyout district of Khouribga and in the neighbouring towns of Hattan and Boujniba,” he told Reuters.

“The riots started after OCP issued a list of few hundreds of beneficiaries of jobs which disappointed youths from the region as there had been more than 30,000 applicants,” Assal said.

Residents from Khouribga confirmed the information.

“Several were wounded among protesters and the anti-riot forces. Protesters used stones while anti-riot police used water canons and tear gas,” said a resident in Hattan who asked not to be named.

Assal also said an unspecified number of protesters and members of the police force were wounded during the riots.

The protesters ransacked a commissary belonging to OCP in Khouribga, the local governors’ offices and town halls in the mining towns of Hattan and Boujniba, Assal added.

Hassan Berranoun, head of media relations at OCP, said there “were problems between the police and protesters ” in the Khouribga region and that the OCP commissary was ransacked on Tuesday.

The monopoly, which isMorocco’s top export earner, said in March registered applicants would be given training courses within few weeks. It hired 6,000 people over the past five years, a third of its workforce, it added.

Berranoun said the number of applicants has exceeded 36,000.

The company is providing 5,800 jobs immediately and would give paid training to an additional 15,000, which he said was unprecedented inMorocco.

Unemployment inMoroccoofficially stands at around 9 percent, rising to 18 percent among graduates and 33 percent among Moroccans aged below 35