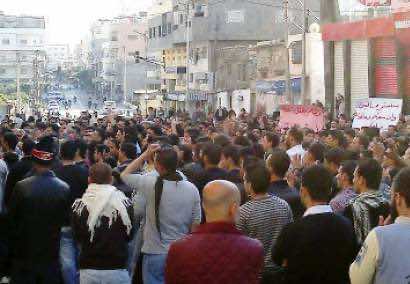 Three people died today in the northern province of Idlib, where about 60 tanks were deployed along with helicopters this month, said Ammar Qurabi, head of the National Organization for Human Rights in Syria.

At least 500,000 people rallied in the city of Hama to call for the fall of Assad’s government, Qurabi and Mahmoud Merhi, head of the Arab Organization for Human Rights, said by phone today. Al-Jazeera television showed the city’s rallies.

The past four months of protests have been the biggest challenge to the Assad family since 1982, when Hama was also the scene of an uprising. Assad’s father and predecessor, President Hafez al-Assad, used the army to end those demonstrations, which were led by the Muslim Brotherhood and in which Human Rights Watch said about 10,000 people died. Syrian forces have killed more than 1,650 in this year’s unrest, Qurabi and Merhi said.

Thousands of protesters also took to the streets after Friday prayers today in Homs, Aleppo and Deir al-Zour, as they have since the unrest began in the southern province of Daraa, the three activists said.

“This is a message to the regime that the people will continue to protest so long as it doesn’t abandon the use of violence and terror,” Qurabi said. There is a “heavy security presence,” and checkpoints in the Damascus suburbs of Tal, Harasta and Douma, Merhi said.

The U.S. ambassador to Syria, Robert Ford, visited Hama yesterday, traveling through a military and civilian checkpoint to reach the city, where he spoke to more than a dozen residents and visited a hospital, State Department spokeswoman Victoria Nuland said yesterday. Ford described the situation as tense, and noticed that shops were closed, she said. The U.S. Embassy had informed Syrian authorities of the visit, she said.

The Syrian Foreign Ministry said Ford didn’t obtain permission for his visit to Hama, according to a statement carried by the state-run Syrian Arab News Agency. Ford’s visit is “clear evidence of the involvement of the United States in current events in Syria and is an attempt to incite an escalation of the situation which disturbs the security and stability” of the country, the ministry said.

Nuland said today the U.S. is “dismayed” by the reaction of the Syrian authorities to Ford’s visit to Hama, calling the Syrian Foreign Ministry’s allegations “absolute rubbish.”

“This is not about us getting in the middle of it,” Nuland said.

As many as 400,000 people in Hama rallied against Assad’s rule July 1 and 2, and at least 23 demonstrators have been killed in the past week in the city by security forces backed by tanks, according to Merhi and Qurabi.

Syrian Foreign Minister Walid Al-Muallem denied there is a “military campaign” against Hama in a July 6 CNN interview.

At least 20,000 people have been arrested since the demonstrations began, with half still in detention, Qurabi said.

France’s ambassador, Eric Chevalier, was also in Hama yesterday, and went to a hospital where he met wounded people and their families, French Foreign Ministry spokesman Bernard Valero said in a statement today.

“France repeats its preoccupation for the inhabitants of Hama and its condemnation of the violence exerted by Syrian authorities against the protesters and the civil populations,” Valero said.

The protests against Assad’s 11-year rule have been part of a wave of unrest across the Middle East and North Africa this year that has unseated the leaders of Egypt and Tunisia. Assad blamed the demonstrations on a foreign conspiracy on June 20 and said the opposition was trying to create a sectarian divide.

Assad said last month that the protests have been marked by “vandalism, murder and the destruction of private property,” and that the demonstrators are being paid. Members of the security forces have also been killed during the unrest, though the government hasn’t said how many.

Thousands of Syrians have fled across the border to Turkey to escape violence in northern towns, straining relations between the countries. A total of 9,182 Syrians remain in camps in Turkey set up by the Turkish Red Crescent in the province of Hatay, the country’s Disaster and Emergency Management Presidency said today in a statement. As many as 15,391 people entered Turkey during the upheaval.