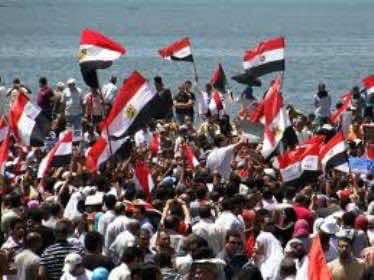 Tens of thousands of Egyptians packed city centres across the country on Friday to demand faster reforms and voice frustration at what they regard as foot-dragging by military rulers and government officials.

Anger has been building among ordinary Egyptians and activists over the time taken to prosecute Hosni Mubarak and former officials charged with corruption and killing demonstrators during the uprising that toppled the president.

Most political organisations including the Muslim Brotherhood, Egypt’s most organised grouping, backed calls for the protest, called “The Revolution First”, which took aim at Mohamed Hussein Tantawi, who heads the ruling army council.

Cairo’s Tahrir Square, centre of the uprising in February, was decked with red, white and black Egyptian colours in one of the biggest rallies since Mubarak’s downfall.

“We want to change the government and those in charge,” said Ehab Mohamed Mahmoud, 36, who checked those entering the square.

“The Field Marshal as well. He is an integral part of the old regime,” he added, referring to Tantawi who was Mubarak’s defence minister for two decades.

“The enemies of the revolution are many. But the army and the people are one hand. We ask the army to speed up the legal procedures to try the corrupt,” said Mohamed Ali, a Brotherhood member in Tahrir.

Analysts say the political group, harassed and repressed under Mubarak, is best positioned to benefit from the timetable for transition outlined by the army, with a parliamentary election in September.

Presidential hopeful Mohamed ElBaradei, a former U.N. diplomat, told CNN there were some “unrealistic expectations” as Egyptians shook off decades of repression and he said it would take time to deliver wholesale change.

“But definitely there is no going back. At least people now are still poor, but they are free,” he said. “They can go by the millions in the streets to demonstrate, and demonstrate peacefully … It’s a feeling that they are being empowered.”

Activists handed out surveys and one question read: “How do you assess the performance of the military council?” Some protesters showed off their forms where they had ticked a box saying: “Performance getting worse.”

As with previous protests since Mubarak was ousted, activism combined with a festive mood. Children with faces painted in the Egyptian flag’s colours joined their parents. As evening fell, numbers dwindled but some in Tahrir vowed to stay overnight.

There was no visible police or army presence.

Many Egyptians believe the health problems reportedly afflicting Mubarak are a ploy by army generals to avoid bringing the former air force commander to trial.

Public frustration has also been fuelled by court rulings this week clearing three former ministers of graft charges and another court decision to free on bail 10 policemen charged with killing demonstrators.

“Punishment for the killers of the martyrs,” read one banner in Tahrir Square, referring to the killing during the 18-day uprising of more than 840 people, now known as “martyrs”.

“Down with the Field Marshal”, the crowd repeated as they were spurred on by one speaker.

Thousands of Egyptians gathered in other cities, including the Suez Canal cities of Suez and Ismailia, Alexandria on the Mediterranean and the Red Sea resort of Sharm El-Sheikh where Mubarak has been detained in a hospital since suffering heart problems during questioning in April.

“We oppose the military council and we demand Field Marshal Tantawi steps down immediately. The army is doing Mubarak’s bidding and the revolution is faltering,” said Mohamed Fahmy, leader from the Coalition of the Youth of the Revolution.

Gun shots rang out near Tahrir square and in Suez, witnesses said. A witness in Tahrir said it was not clear where the shots came from. In Suez, one of the most violent spots during the uprising, one protester was shot by a person who was caught shortly afterwards by protesters, a Reuters eyewitness said.