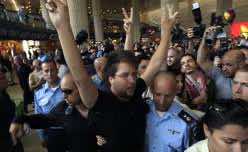 Israel was preparing to expel 124 mostly European activists who had managed to arrive on flights to the country as part of a pro-Palestinian protest, an official said on Saturday.

“Access to Israeli territory was blocked to 124 pro-Palestinian militants coming from Europe, who are now being held in Israel jails,” said Sabine Hadad, spokeswoman for the immigration service.

They will be expelled “as soon as there are places on appropriate flights,” she said, adding that because Saturday is the Jewish Sabbath, “there are not a lot of flights and this could take a bit of time.”

She said most of the activists were French, with the others being American, Belgian, Bulgarian, Dutch and Spanish.

While awaiting expulsion, they are being held at two jails — one near Tel Aviv and the other in the Negev desert.

“They are receiving the same correct treatment as all other prisoners,” Hadad said.

The activists were participating in the “Welcome to Palestine” campaign, which some have called the “flytilla,” in which up to 800 activists were to fly in on a peaceful mission to visit Palestinian families.

Israeli authorities said they largely managed to pre-empt the campaign by foreign activists demonstrating for the right of access to the occupied West Bank.

Officials said that by notifying foreign airlines of ticket-holders who would not be admitted to Israel they had prevented hundreds from boarding at their ports of departure.

The “flytilla” took place as a flotilla of ships was being prevented by Greece from sailing to the Gaza Strip in a bid to break the Israeli blockade on the Palestinian territory.