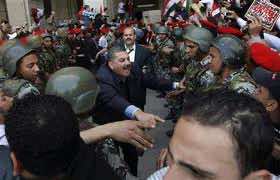 Egypt has ordered the detention and questioning of three police officers in the case of a man who relatives say was tortured to death by authorities, state news agency MENA reported on Saturday, citing Alexandria’s public prosecution.

Mohamed Sayyid Bilal, 32, was arrested in January after an as yet unidentified bomber killed 23 people on January 1 at a church in Alexandria. Bilal’s body was turned over to relatives a day later and bore signs of torture, his family said.

MENA said initial investigations showed Bilal, who was one of many Salafists — followers of strict Sunni Muslim teachings — rounded up along with others as suspects in the bombing, had no link to the attack on the church.

Mubarak is due to stand trial on August 3 for the killing of protesters on charges that could carry the death penalty. An emergency law in place since 1981 allows indefinite detention without charge and was used under Mubarak to crush dissent.

Prime Minister Essam Sharaf, in an address on state television on Saturday, said he had ordered the interior minister to issue a decree ending service for all police officers accused in cases of killing protesters.

A thousand protesters gathered in the port city of Suez, blocking a main road to the Suez Canal and Tawfik port, after Sharaf’s speech. The demonstrators protested against what they said was government lip service to their demands.

The demonstrators demanded the re-detention of police officers accused of killing protesters in Suez but released on bail last week. They threatened to block the entry of canal workers and seize a main building belonging to the Suez Canal Authority.

One of Egypt’s most prominent youth groups, the April 6 Youth Movement, said on Saturday it would continue its sit-ins across the country until Sharaf’s “words (turn) into tangible action,” state news agency MENA reported.

A U.N. human rights team in June urged Egypt’s interim military authorities to move quickly to lift the long-standing state of emergency and to declare that torture would no longer be tolerated.