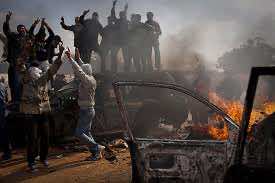 The attacks came after the Libyan leader staged shows of support in key cities in his area of control and threatened to strike his enemies at home and abroad.

Rebels in Misrata said the death toll in the coastal town had risen to seven from six, with at least 17 wounded, after a heavy attack by Gaddafi artillery the day before.

A Reuters team in the area said rebels were consolidating their frontline 36 km (23 miles) west of Misrata in the direction of the capital Tripoli, but were coming under heavy fire from artillery and truck-mounted Grad missile systems.

Rebels have advanced on two fronts against government forces in recent days, but troops have fought back.

After weeks of static fighting, the rebels have made significant advances this week: pushing west from Misrata to within 13 km (8 miles) of Zlitan, where large numbers of pro-Gaddafi forces are based, and seizing the village of Al-Qawalish in the southwest.

In a defiant speech late on Friday, Gaddafi threatened to export the war to Europe in revenge for the NATO-led military campaign against him, and to crush his enemies.

The “traitors” ranged against him in Libya and elsewhere will “fall under the feet” of the Libyan masses, he said.

In Tripoli and 800 km (500 miles) to the south in the desert town of Sabha, tens of thousands, swelled by representatives of the tribes of the region, had gathered for Friday prayers in what appeared to be an attempt to show that Gaddafi enjoys widespread support in the areas he still controls despite the rebel gains of recent weeks.

While the insurgents have advanced on two fronts, rebels in Misrata came under heavy artillery fire from Gaddafi’s forces.

A rebel sympathiser told Reuters opposition forces had been moving closer to neighbouring Zlitan, one of a chain of government-controlled towns blocking their advance to Tripoli.

As they advanced, pro-Gaddafi troops inside the city fired rounds of explosives to block their progress.

“The rebels are waiting for NATO backup or for Gaddafi forces to run out of ammunition to make a move to take the city centre,” he said.

NATO said its aircraft attacked a missile firing position at Tawurgha, south of Misrata, on Saturday. The missile site was hidden in farm buildings and being used to attack civilians, a statement from the alliance said.

In the Western Mountains region southwest of Tripoli, NATO warplanes bombed forces loyal to Gaddafi several times on Friday, their bombs landing about 3 km (2 miles) east of the village of Al-Qawalish, according to one rebel fighter.

Taking Al-Qawalish brings them closer to having control of a major highway into the capital.