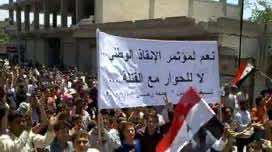 Syria opened a “national dialogue” on Sunday that it hailed as a step towards multi-party democracy after five decades of Baath party rule but its credibility was undermined by an opposition boycott.

Some 200 delegates, who included independent MPs as well as members of the Baath party, in power since 1963, observed a minute’s silence in memory of the “martyrs” before the playing of the national anthem.

But opposition figures boycotted the meeting in protest at the government’s continued deadly crackdown on unprecedented protests against President Bashar al-Assad’s rule that erupted in mid-March.

“We are going to hold a comprehensive national dialogue during which we will announce Syria’s transition towards a multi-party democratic state in which everyone will be equal and able to participate in the building of the nation’s future,” Vice President Faruq al-Shara said in his opening address.

“This dialogue is beginning at an awkward moment and in a climate of suspicion… and there are many obstacles, some natural and some manufactured, to a transition towards another point,” Shara said.

“This dialogue is not a concession by the government to the people but an obligation for every citizen.”

Shara said that within a week the interior ministry would implement a government decision to “remove all obstacles to any citizen returning to Syria or travelling abroad”.

“Circumstances have prevented the full implementation of several laws promulgated recently, including that ending the state of emergency,” in force for five decades, the vice president said.

“We need to get out of this vicious circle… and organising demonstrations without prior approval is leading to unjustified violence,” he said.

“We need to recognise, however, that without the sacrifices made by the Syrian people who have shed blood in more than one province, this meeting could not have been held.

“Without a democratic, multi-party system… our society will not achieve freedom or civil peace.”

Assad announced the dialogue in a keynote speech on June 20, only his third intervention since the protests against his rule erupted.

A Facebook call for nationwide demonstrations against taking part in the dialogue brought hundreds of thousands onto the streets on Friday. Nearly half a million protested in the flashpoint central city of Hama alone.

Security forces killed at least 15 people and arrested more than 200 during the protests held under the banner “No to dialogue”, activists said.

“I strongly condemn the continued brutal crackdown against peaceful protesters, including by means of large-scale deployments of the Syrian military, in the city of Hama and elsewhere,” Ashton said.

“This path of repression and violence discredits the promises by the Syrian leadership and its legitimacy and commitment to reform. Violent repression and dialogue are incompatible,” she added.

Human rights groups say that since the protests first broke out, the security forces have killed more than 1,300 civilians and arrested at least 12,000.

There has also been an exodus of refugees to neighbouring Lebanon and Turkey.