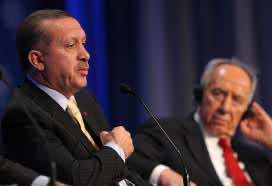 Turkey’s leader has “shut the door” on reconciliation with Israel by insisting it end the Gaza blockade and apologise for storming a Turkish ship sailing towards the Palestinian enclave, Israel’s top diplomat said on Sunday.

But in a possible reflection of disagreement within Israel’s coalition government, another official said rapprochement talks continued with Turkey ahead of the publication of a U.N. report which Israel has predicted will largely vindicate its actions.

Israel, whose marine commandos killed eight Turks and a Turkish-American in fierce brawls aboard the vessel, has broached paying compensation but refused to apologise, saying its personnel acted in self-defence.

“It is clear that this person is looking not for accommodation, nor peace, nor normalisation, but wants to humiliate the State of Israel, sap its international standing, and harm our status in the region,” Israeli Foreign Minister Avigdor Lieberman said.

“I’m surprised he didn’t also demand that we set the retirement age for women,” he told Israel Radio, referring to a recent domestic political dispute. “He has no intention of arriving at normalisation with us. He has shut the door.”

Citing an additional concern that the marines could be exposed to prosecution aboard, Israeli officials say they will go no further than “expressing regret” over the incident.

The overtures were made in several rounds of low-key talks between Israeli and Turkish delegates in Geneva and New York.

Lieberman, a hardliner within Prime Minister Benjamin Netanyahu’s conservative coalition, has voiced misgivings at the contacts. At the height of the crisis, he likened Turkey under Erdogan’s Islamist-rooted AK Party to Iran, Israel’s arch-foe.

Zvi Hauser, Netanyahu’s cabinet secretary, said separately Sunday that negotiations with Turkey continued and that he hoped a “redeeming formula” for reconciliation could be found.

“Improving relations with Turkey is an Israeli interest,” Hauser told Army Radio, but added that this would have to be balanced with Israel’s security concerns.

Israeli officials say the U.N. report will come out on July 27. Citing earlier drafts, they predict it will find in favour of the Gaza blockade and its enforcement, which Israel says stem arms smuggling by the strip’s ruling Islamist Hamas militants.

Turkey, which calls the blockade illegal and has often censured Israel’s Palestinian policies, says it would not accept such findings by the panel appointed by U.N. Secretary General Ban Ki-moon and headed by former New Zealand premier Geoffrey Palmer.