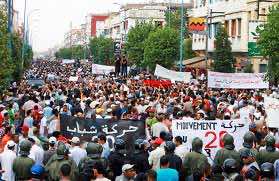 Thousands of Moroccans staged protests on Sunday, the latest in a series of peaceful demonstrations by a youth-led movement to demand reforms that go beyond constitutional changes crafted by the palace.

Anti-riot police deployed in the centre of Rabat to prevent up to 2,000 sympathisers of the February 20 opposition movement from clashing with those in favour of the constitutional reform.

Inspired by uprisings that ousted leaders in Tunisia and Egypt, the movement has been holding regular protests for months to demand a parliamentary monarchy and that officials they accuse of graft be brought to justice.

Witnesses said a protest in Casablanca drew close to 8,000 with a few hundred in a counter-protest under the watch of a heavy police deployment. Similar protests took place in other cities such as Oujda and Agadir.

“No to a ruler who plunders public funds,” read a placard carried by February 20 protesters in Rabat. “Wherever you go, you find corruption, you killed us with corruption,” they chanted.

The counter-protesters forced February 20 protesters to change the route of their march twice and threw eggs at them.

“Jews, traitors, donkeys,” they yelled, pointing to February 20 protesters and “the people want traitors to be executed”.

Named after the date of its first protest, the movement is a leaderless and loose national network that has managed to cobble together an unlikely alliance of Islamists and secular leftists.

The majority of Moroccans revere the king and the protest movement has failed to gather the momentum or widespread support that toppled leaders in Egypt and Tunisia.

King Mohammed is supposed to hand over some of his powers to elected officials under the reform which still keeps him at the centre of every strategic decision. The move is viewed in other Arab monarchies as a test case for whether reform can hold back the wave of “Arab Spring” uprisings sweeping the region.

The official MAP news agency said 70,000 people held marches and rallies in support of the constitutional reform, which the government said was approved by close to 100 percent of those who voted in a July 1 referendum.

An Interior Ministry spokesman could not be reached to provide figures on the size of protests organised by February 20.

Redouane Bouasri, who was among the anti-February 20 protesters in Rabat, said: “February 20 wants a constitution drafted by representatives of the people. We don’t have the politicians who can do that.”

Anti-riot police kicked a handful of February 20 protesters who tried to push their way to parliament, lightly injuring at least four of them. However, the violence was not of the same scale as before the referendum.

Opponents say the voting figures in favour of the reform were inflated and point to the more than half Moroccans eligible to vote who stayed away from the polls, either because of boycott or lack of interest. (Editing by Alison Williams)