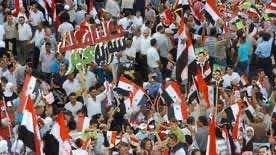 The United States accused Syria of having organized an angry 31-hour protest outside the U.S. Embassy in Damascus over the weekend while the U.S. ambassador told the foreign minister that such anti-American “incitement” must stop.

Syria earlier on Sunday said it had summoned the envoys of the United States and France in Damascus to protest their visit to the restive city of Hama last week without clearance from the authorities.

In Washington, the State Department said the Syrian government chose to protest Ford’s trip to Hama by organizing a a protest outside the embassy that lasted 31 hours on Friday and Saturday with protesters hurling tomatoes, eggs, glass and rocks.

Two embassy employees were struck by food, the department said in a written reply to queries.

It said the meeting had been requested by the U.S. Embassy and scheduled since Thursday.

“Ambassador Ford was not summoned by the Ministry of Foreign Affairs,” the State Department said.

Hama has been the site of some of the biggest demonstrations seeking to oust Syrian President Bashar al-Assad. He sent security forces back into the city and ringed it with tanks this week.

U.S. President Barack Obama has reacted gingerly so far to the protests in Syria, part of a wave of unrest in the Arab world that toppled rulers in Egypt and Tunisia and led to NATO involvement in a civil war in Libya.

Obama has said Assad must either lead reforms in Syria or get out of the way. Ford’s visit to Hama marked a symbolic strengthening of U.S. support for peaceful protesters’ goals and methods.

Moualem at the session in Damascus on Sunday filed an official complaint with Ford regarding his visit to Hama, the State Department said.

At the same meeting, Ford “made clear that Syrian government incitement of Syrians against the United States, including through aggressive protesters in front of the embassy, must stop.”

“The Syrian government must not use his visit to Hama – meant only to gather information and support freedom of expression – as propaganda,” the department said.

Ford called on the Syrian government to meet its responsibility under the Vienna Convention to protect diplomats and diplomatic facilities, the department said.

Ford’s trip to Hama coincided with a visit by the French ambassador but had not been coordinated, the department said Friday.

Sharaa spoke at the start of a two-day conference aimed at setting the framework for a dialogue promised by Assad, who is facing the biggest challenge to his 11-year rule. The Baath Party has ruled Syria since it took power in a coup in 1963. Bashar’s father, Hafez al-Assad, ran the country with an iron fist for more than 30 years.

The State Department called on the government to meet “the aspirations” of the Syrian people and to lead to a transition.

‘The Syrian government will be judged by its concrete actions, not its words,” the department said.