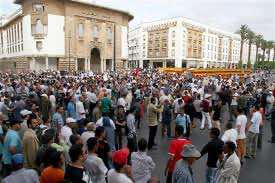 Thousands of demonstrators, including Islamists, held rallies in Rabat and Casablanca Sunday to demand greater political reform and social justice in Morocco.

The fresh protests were organised by the February 20 Movement, which has organised months of demonstrations calling for reforms in the Arab world’s oldest reigning monarchy and denounced a new constitution as window-dressing.

The February 20 Movement includes the Justice and Charity group — an Islamist organisation that is officially banned but tolerated by the authorities — as well as leftist militants and independent cyber-activists.

In the capital Rabat, around a thousand protestors also gathered on Bab El Had square in the city centre.

They were met by a handful of counter-demonstrators waving portraits of King Mohammed VI but no incident was reported.

Demonstrations were also scheduled to take place in the city of Tangiers later in the evening.

A July 1 referendum on a new constitution curbing the king’s near absolute powers was overwhelmingly adopted.

But that result has failed to quell calls for more radical political reform. Pro-democracy activists inspired by similar movements elsewhere in the Arab world have vowed to continue their protests.