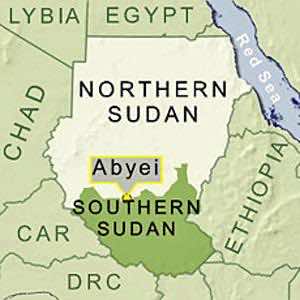 July 11, 2011 — Why is the July 9th, 2011 creation of a separate state in Southern Sudan is giving jitters to sates in both Africa and the Middle East and sending mixed signals depending on what side of the secession people are? Could it be that the situation in the Sudan would sooner or later have a domino effect throughout Africa and the Middle East? The following survey is designed to find out whether what has just happened is unique to the Sudan or that it would sooner or later be replicated throughout the region.

To begin with it does not take a rocket scientist to figure out that most of these countries are homes to different groups some of whom belong or subscribe to different cultures, religions, ethnicities, languages not to mention political and economic ambitions. Do you know that in Nigeria alone there are 521 languages? Even though English is the official language there are other major languages spoken by different segments of the population including Hausa, Igbo, Yoruba, Fulfulde, Kanuri and Ibibio. Along with languages, Nigeria is the home to about 250 ethnic groups with of course different customs and traditions. Ethnic groups such as the Fulani, Hausa, Yoruba and Igbo make up 68% of the population while groups including the Kanuri, Ijaw, Edo, Ibibio, Ebira, Tiv and Nupe make up about 27% of the population. The other ethnic groups are smaller and make up about 7% of the population. I bet this piece of information adds a new dimension to the mix regarding the latest clashes between the Muslims in the northern part of the country and the Christians in the southern part.

When it comes to Africa the situation involving cramming people of different ethnicities and cultures in demarcated territories is the product of the scramble for African colonies that began in earnest in the year 1880, spearheaded by countries such England, France, Spain, Italy, Germany, Belgium and the Netherlands. Since the main objectives for colonizing Africa was to siphon the continent’s riches only scant attention was paid to the diverse populations when the boarders were drawn at the Berlin Conference (1884-1885). As a matter of fact almost all of the boarders that nowadays separate countries in Africa and the Middle East date back to the colonial period. Having colonized Egypt and the Sudan England, whether intentionally or unintentionally, drew the boarders of the latter regardless of the makeup of the population particularly in terms of ethnicity, religion and cultural traditions thus leaving behind a ticking time bomb that detonated first in 1955 in a civil war between the North and the South that lasted till 1972 and second in 1983 and that lasted till 2005. Both civil wars cost thousands of lives not to mention widespread devastation and displacement of people on both sides.

Along with the Sudan the effect of such demographic disparities was mainly responsible for conflicts and devastations in a number of African states. Let’s take Rwanda for example the British and before them the Belgians not only established boarders encircling two groups who harbor traditional hostilities towards each other namely the Hutus and the Tutsis but also pursued a policy of “divide and conquer” by favoring the Tutsis over the Hutus thus exasperating the situation that eventually erupted in the bloody genocide of 1994 after the plane carrying the Rwandan President Juvenal Habyarimana and his host Burundi President Cyprien Ntaryamira was shot down while approaching Kigali airport and which culminated in the death of about 800.000 Rwandans most of them Tutsis not mention widespread destruction and displacements on a very large scale. Thus far the roots of many other civil wars in Africa including in Sierra Leon, Ethiopia and Eretria and the Democratic Republic of the Congo (formerly Zaire) stretch all the way back to the unbridled scramble for Africa’s riches and the creation of fragile societies that were originally lacking in cohesion and consequently could come unglued at the first serious threat to life and lively hood. Along with sub-Saharan Africa, North Africa also is not immune to the resurfacing of national or ethnic frictions not to mention simmering disenchantments and animosities towards existing social or political orders or the statuesque as a whole. Examples of that are the agitations by the Berber (Amazigh or Shluh) in countries such as Morocco and Algeria to secure autonomy if not separation and independence.

So far the governments of Morocco and Algeria due to internal lobbying and pressures and external prodding particularly by Western States including the United States, France, England and Spain as well as the collective pressures exerted by the EU (European Union) have been making concessions to their Berber populations including acceding to their demands to celebrate their unique cultural traditions and teach their own language (Tamazight) along with Arabic. If the Berber populations have so far secured concessions from their Arab-dominated governments, other ethnic groups particularly of African descent such as the Tawariq who inhabit southern parts of Morocco, Algeria and Libya may not be that far behind .Who would have thought that Egypt itself is nowadays dealing with a similar situation and I don’t mean with the Coptic Christians. Lately particular groups of Nubians who inhabit a southern part of Egypt have also been calling for autonomy if not outright separation that would in their view lead to independence.

Now let’s head east to the Middle East and see if there are identical situations with the potential to escalate into the level of the North/South divide in Sudan which is now nearing its conclusion with the real potential of irreconcilable and outright separation following the January 9th referendum. Along with the local populations who have been anxious for the opportunities to mobilize and fulfill their long cherished ambitions for autonomy or better yet independence, the other major players who are working behind the scenes are the old colonial states including Britain and France as well as the United States of America. The US and Western Europe have been through their leaders or high officials expressing willingness to countenance future reshuffling of populations and boarders to create what they call a “New Middle East” that is more amiable and docile. The former US Secretary of State Condoleezza Rice once described the destructive war between Israel and Hizbullah in Lebanon in 2006 as simply the prelude or as she put it “the birth pangs of a new Middle East” (The New York Times, August 10, 2006). Her comments simply reflected a strategy that has been on the table at the Pentagon in Washington, DC and NATO headquarters in Brussels for some time now. As a matter of fact the plans to reshuffle the geopolitical map of the Middle East will include almost all of the Arab countries and their populations whether they are Arabs, Kurds, Druze, Maronite or Coptic Christians as well as Shi’a and Sunna Muslims among others in accordance with their distributions or their status hence being majorities or minorities. The two attached maps of the Middle which were drawn by General Ralph of the Pentagon shows the boarders that were drawn by England and France following their occupation of the area at the end of World War I (1914-1918) and the new map and boarders proposed by the general as the new and improved Middle East. As in the case of Africa, countries of the Middle East still include diverse populations some with distinctly different cultures, ethnicities and even religious traditions. Not that long ago the then US vice presidential candidate and now Vice President Joseph Biden responding to the escalating insurgency in Iraq suggested dividing the country into autonomous and possibly federated regions controlled by the Shi’a in the south, the Sunna in the Middle, the Kurds in the North as well as setting aside areas at the center possibly in the Baghdad region for the other minorities including Iraqi Christians be they Chaldeans, Assyrians or Syriacs. According to these maps even Saudi Arabia that outwardly looks entirely homogenous will not be spared having its present territory divided in two.

Now you can clearly see that the fear of scenarios similar to that in the Sudan unfolding in many African and Middle Eastern countries is real and not imaginary. Even players, be they internal or external, have obviously been mulling over such possible transitions for some time now. Mark my word it won’t be long before the people of Darfur and I don’t mean the Northerners who identify themselves as Arabs but the Southern Darfurians, who regard themselves as Africans, would demand independence akin to their brethrens in Southern Sudan. Here It becomes clear that countries of Africa and the Middle East are now facing two options, either remain passive and eventually find themselves facing similar situations such as the one in the Sudan or proactively engage their societies so as to mend any fissures between their diverse social groups, actively seek solutions to their grievances particularly concerning economic opportunities, and create unified and democratic communities that transcend internal divisions be they ethnic, national, religious or even linguistic.