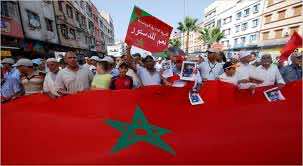 RABAT, Morocco — With the pace of democratic change stalled or staggering under violent crackdown in the Middle East and North Africa, Morocco’s recent decision to alter its Constitution provides what some see as an alternative to the bloody confrontations that have marked the Arab Spring.

Morocco’s decision — in the form of a referendum to give more powers to elected leaders — was offered as a unique answer to the insistent calls for democratic change that have swept through Arab countries since Tunisians unexpectedly toppled their longtime dictator in January.

For now the electoral victory in Morocco remains largely symbolic. King Mohammed VI proposed the referendum himself, but the revisions to the Constitution it allowed ensure that he maintains nearly absolute political power and unquestioned control over the military. And the Constitution’s ability to bring real change to this centuries-old monarchy will largely depend on how the text is applied to everyday politics.

But supporters of the new Constitution argue that moving slowly may be the surest way to achieve sustainable change, and analysts say that even baby steps may be enough to inspire others in the region to follow suit eventually. At the least, the events in Morocco provide a striking counterpoint to those in Egypt and Tunisia, where leaders’ concessions appeared to work against them, emboldening protesters.

“It’s a peaceful revolution, and the major difference with other countries in the region is that protesters never called for the fall of the regime,” said Mokhtar El Ghambou, who is helping to found Rabat International University. “There was no bloodshed. I think it shows there are two options; the first one is radical change, the second is change with continuity.”

For some, that is a good thing. For others, Morocco’s example is troubling, providing ammunition for rulers and counterrevolutionaries intent on breaking the momentum for sweeping reform that was in protesters’ favor for months.

“If the Egyptian revolution fails to bring change, with places like Morocco in mind, there will be a big backlash against the revolutions,” Mr. El Ghambou said.

Morocco’s evolution was inspired by many of the same issues that birthed the revolutions in Egypt and Tunisia.

The kingdom, on the western edge of North Africa, has a large population of restless young people, many of them unemployed, and the country is troubled by a level of nepotism reminiscent of Tunisia’s and a yawning gap between rich and poor.

At first, the nation’s reaction to the stunning news from Tunisia and Egypt tracked with those of others in the region. Protesters took to the streets with their grievances, and the government cracked down, sometimes violently.

But the narrative diverged from there. Government troops beat demonstrators, but did not fire on them, and the protesters themselves were more interested on pushing their king toward a true constitutional monarchy than pushing him out.

Mohammed VI already had a well of good will to draw on. He is considered forward-thinking and a gentler leader than his father, King Hassan II. Early in his reign he took steps to modernize the kingdom, including promoting a family law that raised the age for women to marry and allowed them to seek a divorce.

With the rise of radical Islam, however, the king slowed the pace of change, frustrating many of his subjects. Over time, he was also accused of tolerating corruption and of allowing advisers and former schoolmates to amass fortunes from state contracts.

He began to propose major changes again only after protests roiled major Moroccan cities this year. He proposed the constitutional changes that went to a vote on July 1, and pardoned scores of prisoners who the opposition said were jailed for their political beliefs.

Under the new provisions, which fell short of demands for a real constitutional monarchy, the prime minister will still be appointed by the king, but will now need to be chosen from the party with the parliamentary majority. In a change from the past, the prime minister will be charged with appointing government ministers, but the king still needs to approve those choices.

The constitutional changes — and the reality that 98 percent of an unusually high turnout of voters approved them — has left some Moroccans, especially on the left, disillusioned.

“The king gives the impression of giving the keys to the prime minister, while keeping a copy in his pocket,” wrote Karim Boukhari, editor and publisher of the francophone weekly Tel Quel. “Morocco deserves much better, and right now.”

Members of the February 20 Movement for Change, which coordinated the country’s demonstrations, have vowed to keep up weekly protests.

“This text is not acceptable, it was cooked up in the hallways of the palace,” said Zineb El Rhazoui, a journalist and human rights advocate, who is active in the protest movement. “It’s all cosmetic.”

Whether Morocco’s example can be replicated is an open question. Relative to its neighbors, the country was more open to reform.

Analysts said that other monarchies, including those in the gulf, were unlikely to follow suit in good part because their populations were both wealthier and more conservative, and therefore less likely to agitate for democracy.

The leaders of two other Arab countries, Jordan and Algeria, have at least suggested political reforms, but it is unclear if they will move ahead.

The situation in Jordan more closely mirrors Morocco’s: it is a monarchy with close ties to the United States, and King Abdullah II has recently reshuffled his cabinet to try to appease protesters. But analysts said regional realities might doom more significant changes, especially as Syria descends further into chaos, with the government unable to quell unrest despite a fierce crackdown.

“They’re closely watching the situation in neighboring Syria, and are very worried about being destabilized by events there,” said Muhammad Abbas Nagi of the Ahram Center for Political and Strategic Studies in Cairo, a government-financed research center. “They’re not comfortable with what could happen if they start answering the protesters’ calls for change.”

It is also in Jordan’s economic interest to maintain close ties with countries like Saudi Arabia, which balks at change in the region and sent troops into Bahrain to support the monarchy after weeks of protests. A recent offer to consider including Jordan as a member of the Gulf Cooperation Council has been perceived as an effort to buttress the monarchy and keep Jordan in the fold.

But even if no country follows Morocco’s example in the near future, the king’s ability, at least so far, to satisfy critics and still maintain power presents an alternative for reformers searching for new ways to wrest power from leaders who have clung to their positions for decades..

“On one side, you have Libya, which is exactly where Arab populations want to avoid going; on the other, you have this Moroccan counterpoint, which showed it was possible to absorb discontent through reforms,” said Haoues Seniguer, a professor and researcher at Lyon’s Institute for Political Studies. “What is certain is that some governments might be inspired by this successful strategy to diffuse protests.”

In the end, whether others follow Morocco’s lead may depend in part on whether the country’s experiment turns out to be a true template for change.

One of the first tests of the king’s commitment to reform will come after parliamentary elections, expected this fall. Detractors will be watching closely to see whether the elections are fair and whether he chooses as prime minister someone anxious for reform or someone who is merely acceptable to the winning party.

For the king’s many supporters, the changes may be imperfect, but they are the best way forward.

“People in Egypt are still throwing rocks at each other, and we already have a new Constitution,” said Rachid Benmami, 55, as he sat in a coffeehouse in Casablanca, Morocco’s economic capital. “The king knows what’s good for his people,” he said, removing an aging picture of Mohammed VI from his wallet.

“We thank God for our king,” he said as he kissed the picture.