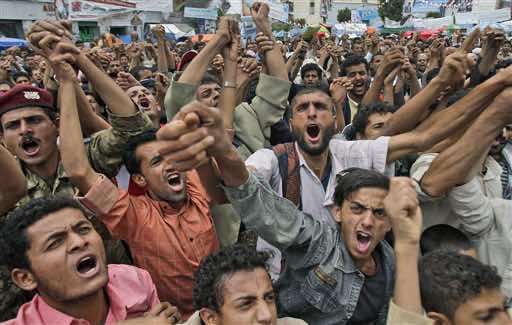 July 11, 2011– U.S. counterterrorism chief John Brennan has met with Yemen’s wounded President Ali Abdullah Saleh to urge him to agree on a plan that requires him to step down as part of a transition to democratic rule.

Brennan visited Saleh Sunday at a Saudi hospital in Riyadh, where the Yemeni leader has been receiving treatment for severe burns sustained in a June 3 bombing at his presidential compound in Sana’a.

The White House says Brennan wished Saleh a speedy recovery and reiterated the U.S. condemnation of that attack. It says the U.S. official also called on the Yemeni president to “expeditiously” fulfill a pledge to sign a political transition plan drafted by the Gulf Cooperation Council.

Saleh has faced five months of near daily mass protests against his 33-year autocratic rule. The GCC-backed transition plan would require him to hand power to a deputy in return for immunity from prosecution.

The White House says Brennan emphasized the importance of resolving Yemen’s political crisis to enable it to successfully confront serious challenges, including terrorist attacks carried out by al-Qaida in the Arabian Peninsula.

It says Brennan also told Saleh that the United States is working with partners in the Gulf, Europe and elsewhere to ensure that Yemen will receive much needed assistance “as soon as the GCC proposal is signed and implemented.”

Yemen’s government also is fighting Islamist militants who took control of two towns in the near-lawless southern province of Abyan in recent months, including the provincial capital Zinjibar. Yemeni officials say fighting in Zinjibar killed four militants and one soldier on Sunday.

In other violence, Yemeni government forces fired artillery at a position held by anti-Saleh tribesmen in the southern city of Taiz, a center of opposition protests. Yemeni security and medical officials say at least two people were killed.