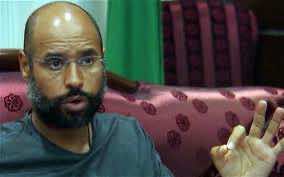 Saif al-Islam, a son of the Libyan leader, said his father’s administration was in talks with the French government, according to an interview published on Monday in an Algerian newspaper.

“The truth is that we are negotiating with France and not with the rebels,” the El Khabar newspaper quoted Saif al-Islam as saying in an interview in Tripoli.

“Our envoy to (Nicolas) Sarkozy said that the French president was very clear and told him ‘We created the (rebel)council, and without our support, and money, and our weapons, the council would have never existed’,” it quoted Saif al-Islam as saying.

“France said: ‘When we reach an agreement with you (Tripoli), we will force the council to cease fire’,” the newspaper quoted Gaddafi’s son as saying.

The comments were published a few hours after French Defence Minister Gerard Longuet, in a television interview, said it was time for the rebel National Transitional Council to come to the negotiating table with Gaddafi’s administration.

France has been one of the leading hawks in the Western coalition trying to force Gaddafi to relinquish power, but Longuet’s comments suggested a growing impatience with the progress of the campaign against the Libyan leader.