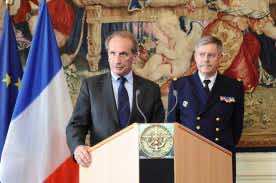 France’s defence minister said it was time for Libya’s rebels to negotiate with Muammar Gaddafi’s government, signalling growing impatience with progress in the conflict.

Gaddafi’s son, in an interview with an Algerian newspaper on Monday, said his father’s government was in talks with the French government. There was no immediate comment from Paris.

French Defence Minister Gerard Longuet said on Sunday the rebels should not wait for Gaddafi’s defeat, while signalling that Paris’ objective was that the Libyan leader must leave power eventually.

Washington said it stood firm in its belief Gaddafi must go.

The messages from two leading members of the Western coalition opposing Gaddafi hinted at the strain the alliance is under after more than three months of air strikes that have cost billions of dollars and failed to produce the swift outcome its backers had expected.

The rebels have refused to hold talks as long as Gaddafi remains in power, a stance which before now none of NATO’s major powers has publicly challenged.

“We have … asked them to speak to each other,” Longuet, whose government has until now been among the most hawkish on Libya, said on French television station BFM TV.

“The position of the TNC (rebel Transitional National Council) is very far from other positions. Now, there will be a need to sit around a table,” he said.

Asked if it was possible to hold talks if Gaddafi had not stepped down, Longuet said: “He will be in another room in his palace with another title.”

Soon after, the State Department in Washington issued a message that gave no hint of compromise.

“The Libyan people will be the ones to decide how this transition takes place, but we stand firm in our belief that Gaddafi cannot remain in power,” it said in a written reply to a query.

It also said the United States would continue efforts, as part of the NATO coalition, to protect civilians from attack and said it believed the alliance was helping to up the pressure on Gaddafi.