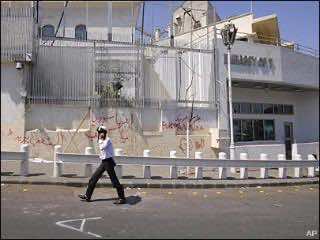 BEIRUT — Syrian government supporters smashed windows at the U.S. Embassy in Damascus on Monday, raised a Syrian flag and scrawled graffiti calling the American ambassador a “dog” in anger over the envoy’s visit last week to an opposition stronghold, witnesses said.

French Embassy security guards fired in the air to hold back supporters of President Bashar Assad’s regime who were also protesting the French ambassador’s visit to the same city, Hama, in central Syria. One witness said three protesters were injured when guards beat them with clubs. The witness asked not to be identified because of the sensitivity of the situation.

There was no immediate word on casualties at the American Embassy demonstration.

The Syrian regime called the visits to Hama interference in the country’s internal affairs and accused the ambassadors of undermining Syria’s stability.

The protests came after U.S. Ambassador to Syria Robert Ford harshly criticized the Syrian government’s crackdown on a popular uprising. Some 1,600 civilians and 350 members of security forces have been killed since demonstrations began, activists say.

Syria blames what it calls “armed gangs” and Muslim extremists for the violence.

Hiam al-Hassan, a witness, said about 300 people had gathered outside the French Embassy while hundreds others were at the American diplomatic compound.

“Syrians demonstrated peacefully in front of the French embassy but they were faced with bullets,” said al-Hassan.

On Sunday, Ford attacked the Syrian government for allowing pro-government protests while beating up anti-regime demonstrators. The pro-Assad protests in Syria are known as “mnhebak,” or “we love you.”

“I have not seen the police assault a “mnhebak” demonstration yet,” Ford wrote on the embassy’s Facebook page. “On July 9, a “mnhebak” group threw rocks at our embassy, causing some damage. They resorted to violence, unlike the people in Hama, who have stayed peaceful.”

“And how ironic that the Syrian Government lets an anti-U.S. demonstration proceed freely while their security thugs beat down olive branch-carrying peaceful protesters elsewhere,” he said. “I saw no signs of armed gangs anywhere not at any of the civilian street barricades we passed,” Ford added.

“Hama and the Syrian crisis is not about the U.S. at all. This is a crisis the Syrian people are in the process of solving. It is a crisis about dignity, human rights, and the rule of law,” Ford wrote.