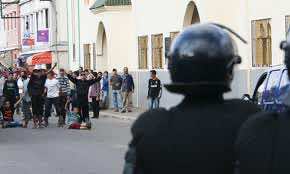 The constitutional revisions approved in the July 1, 2011 referendum can significantly advance Moroccans’ rights, but only if authorities use these new constitutional principles to reform repressive laws and practices, Human Rights Watch said today.

Among the practices that need to be brought into line with the constitution is the police response to peaceful protest, Human Rights said. Since Moroccans began demonstrating in the streets on February 20 to demand major political reforms, inspired by the protest movements sweeping the Arab world, the police have responded on several occasions with extreme brutality. They have beaten peaceful protesters to the point where scores required medical care such as stitches and treatment of broken bones. At least one died in the hospital after being beaten, although the cause of death remains unclear.

“The real test of the Moroccan government’s commitment to human rights is in whether it respects its citizens’ rights in practice,” said Sarah Leah Whitson, Middle East and North Africa director at Human Rights Watch. “It’s not enough to adopt a constitution that affirms, ‘No one may harm the physical or moral integrity of another in any circumstance’ and then allow the police to club peaceful demonstrators.”

The constitutional reforms include several provisions that reinforce citizens’ rights, including gender equality, freedom of expression “in all its forms,” freedom of association, assembly and peaceful protest, the right to a fair trial, and the criminalization of torture, arbitrary detention, and forced disappearance. The constitution precludes press censorship. It requires the authorities to tell anyone they detain “immediately” of the reasons and of their rights. The amendments also grant powers to the prime minister that previously were exclusively the king’s.

Among the many Moroccan laws that need to be brought into line with the new constitution’s sweeping affirmation of these principles are provisions of the press code and penal code that provide prison terms for expression, Human Rights Watch said. These include speech or writing that “defames” public officials or state institutions under articles 45 and 46 of the press code or that “brings harm to” Islam, the monarchy, or Morocco’s sovereignty claim over Western Sahara, under article 41.

The organizers of most of the demonstrations in recent months are from the February 20 Movement for Change, a loosely knit and mostly youth-based group inspired by the uprisings in Egypt and Tunisia. The group’s slogans focus on freedom and democracy, and an end to corruption and repression. At times they have made more specific calls, such as to vastly curtail the king’s powers and prerogatives and to free political prisoners. The powerful Islamist movement Justice and Spirituality, the far-left small party the Democratic Path, and the Moroccan Association for Human Rights, among others, have endorsed the February 20 Movement’s goals.

On several occasions, including during much of June, authorities did not interfere with demonstrations the movement had organized in major cities. But on several other occasions since February, security forces in Rabat, Casablanca, and elsewhere assaulted demonstrators.

Human Rights Watch interviewed protesters in Rabat, Casablanca, and Kénitra who were beaten. They said that security forces assaulted protesters as they were gathering, with no warning, charging them with batons and striking them on their bodies and, in some cases, their heads. In other instances, as protesters were dispersing, security forces pursued protesters down side streets to continue beating them.

The beatings they described would appear designed to mete out summary punishment. Their numerous and consistent accounts contradict official claims that the security forces used only the force necessary to disperse “unauthorized” gatherings, or to disperse people who blocked traffic or disobeyed orders.

Some of the harshest police violence occurred at peaceful protests on May 15, 22, 28, and 29. Human Rights Watch interviewed numerous people who tried to take part in those demonstrations and in earlier ones where police beat protesters.

On May 15 in Témara, as protesters tried to hold a picnic outside a facility thought to be a secret prison, police intercepted arriving demonstrators, blocked them, and beat many of them, pursuing them as they fled to continue beating them.

On May 22 in Rabat and Casablanca, police in large numbers were waiting for demonstrators and began to beat them, and in some cases detain and beat them, as soon as they arrived.

On May 28 and 29, protesters in Rabat, Casablanca, and Kénitra were beaten severely and in some cases detained.

Moroccan law requires organizers of an outdoor demonstration to notify authorities in advance, and authorities may forbid the demonstration in writing if they deem it likely to “disturb the public order,” under article 13 of the law on public gatherings.

Some of the February 20 Movement protest organizers said that they had not been notifying authorities because they believed the government would forbid their protests under any circumstances. A few said that even though they had not notified the authorities, the authorities served them with written notifications that the protests they were planning would be unauthorized.

For example, Karim Tazy, a 52-year-old Casablanca businessman who supports the protests, received one such notice on May 26, signed by the director of general affairs, Najib Grani, under the order of the Wali (governor) of Casablanca, warning him that a demonstration planned for May 29 was not authorized.

Even when dispersing demonstrations that authorities deem unauthorized or threatening to the public order, international standards allow law enforcement agents to use force only as a last resort. According to the UN Basic Principles on the Use of Force and Firearms by Law Enforcement Officials, in the dispersal of assemblies that are “unlawful but non-violent, law enforcement officials shall avoid the use of force or, where that is not practicable, shall restrict such force to the minimum extent necessary” to disperse the protest.

Article 19 of Morocco’s law on public gatherings requires law enforcement agents to issue three oral warnings to disperse via megaphones before they scatter protesters forcibly. The beatings with batons of peaceful protesters, with no warning, and continuing long after protests have been dispersed, violate these standards.

Lawyers representing protesters told Human Rights Watch that a number of protesters have filed formal complaints to the courts about the beatings. Prosecutors have in some cases charged protesters with participating in an “unauthorized” gathering or other charges such as disobeying orders of a public agent, constitution of a “criminal gang,” and destruction of private property. But authorities have not, to Human Rights Watch’s knowledge, announced any investigations or prosecutions of those responsible for the brutal violence against the protesters, except for the investigation into the death of a protester, Kamal Ammari, in Safi (see below).

“Moroccans voted for a constitution that contains bold language in favor of human rights,” Whitson said. “Nothing can show more quickly that their ‘yes’ vote means reforms in practice than a new respect by authorities for the right to demonstrate and sanctions against officers who beat protesters without cause.”