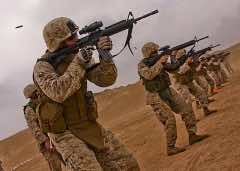 STUTTGART, Germany — With an eye on insurgent movements in Somalia and volatile parts of northern Africa, a new Marine task force has been assigned to U.S. Africa Command as part of an effort to ramp up training partnerships with militaries fighting al-Qaida-linked groups on the continent.

The addition of the Marine infantrymen, coupled with the recent commissioning of an Africa-focused Naval Special Warfare unit based is Stuttgart, home of the AFRICOM headquarters, suggests AFRICOM is starting to add some muscle.

The Special Purpose Marine Air Ground Task Force, expected to be based in southern Europe, will focus on training African troops deploying as peacekeepers to Somalia, while also bolstering militaries attempting to take on groups affiliated with al-Qaida that are operating across the Maghreb region. The force also could provide AFRICOM with the capacity to respond to a humanitarian crisis on the continent.

“We’re not going to go hunt down al-Qaida in the Maghreb,” said Col. Dale Vesely, plans and operations chief for Marine Forces Africa, which is also based in Stuttgart, “but we’re training [African militaries] to go fight it.”

The unit, which includes air and ground elements, could grow from 123 Marines to about 364 troops in the next few years, if the initial missions prove successful, said Brig. Gen. Paul Brier, deputy commander of MARFOR Africa.

The establishment of an Africa-focused Marine task force comes at a time when the Pentagon is attempting to apply more pressure to groups designated as terrorist organizations by the U.S. State Department, such as the Somali militant group al-Shabab.

The U.S. recently committed $45 million in military equipment aimed at helping Uganda and Burundi, which have forces deployed in Somalia, more effectively engage in urban combat, according to the Pentagon. The two countries provide the bulk of the 9,000 African Union peacekeeping force in Somalia.

The Washington Post recently reported that a U.S. drone attacked insurgent targets in Somalia in June.

The plan to send small numbers of troops to train other militaries to target terrorist groups is in line with a U.S. counterterrorism strategy in Africa that puts a premium on maintaining a low profile, said Rick Nelson, a counterterror expert at the Center for Strategic and International Studies in Washington.

“The United States is certainly in a challenging position because we constantly have to balance our presence against the potential negative impacts of that presence,” Nelson said. “We’ve also learned a large-scale military intervention to combat al-Qaida is no longer economical or politically feasible.”

Sending in large numbers of troops for large scale counterterrorism training, or trumpeting the successes of drone assaults could serve as propaganda fodder for extremist groups that want to paint the U.S. as hostile to Muslim nations, Nelson said.

For its part, the Western-trained African Union forces deployed to Mogadishu have pushed al-Shabab out of previously held positions, helping to prevent an insurgent takeover of the country’s capital city in the past year, according to Sally Healy, a Somalia expert at the London-based Chatham House.

Still, some human rights groups have raised concerns about civilians caught between al-Shabab fighters and the AU force, which has been accused of indiscriminately firing mortars at targets and killing non-combatants in the process.

“If AMISOM (the African Union Mission in Somalia) could stop using mortars to deal with attacks by Shabab, that would certainly make them less unpopular,” Healy said. “If you give AMISOM better methods for dealing with them (Shabab), so much the better.”

Though AMISOM troops and militia groups opposed to al-Shabab have pushed its forces back in recent months, containing the terror group still hinges on outside support, Nelson said.

“None of these organizations are overly effective, which is why international support in terms of training and logistics is important,” Nelson “There is massive room for improvement across the board, and that improvement is going to have to come from outside assistance from the U.S. and others.”

Marine officials say that is just what the new task force will aim to do as it provides local forces with better tactics for confronting the threats that surround them.

The Marines also will work with militaries in northern Africa, where al-Qaida affiliates have long been a concern for the U.S., as part of Operation Enduring Freedom – Trans-Sahara.

The plan to establish a Special Purpose Marine Air Ground Task Force dedicated exclusively to AFRICOM missions has been in development for two years.

The unit’s members have now been selected, and preparations are under way to forward-deploy them in Europe in a matter of months, according to Marines at the command’s Panzer Kaserne headquarters in Stuttgart. However, officials say negotiatons are still under way with the host nation, so they are not yet saying exactly where the task force will be located.

As a back-up plan, the Marines could operate out of the U.S., if efforts to forward-deploy fall through, Vesely said. New troops will be rotated into the unit every six months.

Brier, the outgoing deputy commander of Marine Forces Africa, acknowledged the SPMAGTF is being formed at a time when troops and resources are stretched thin. However, the unit should be able to grow over time as the Corps looks for efficient ways to return Marines to their more expeditionary roots after years spent on combat outposts in Iraq and Afghanistan, Brier said.

“We’re doing it with the idea of, how do we sustain it for the long-haul,” Brier said.