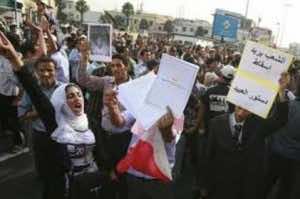 As Morocco finds itself in the early phase of laying down the foundations for future governance, the political reform can prove vital for the rights of its women. Will the constitutional changes expand the scope of women’s legal entitlements? Most importantly, can political reform translate into tangible outcome on the ground?

Calling for the demise of the absolute power of King Mohammed VI, the new Constitution will grant power and legislative authority to an elected parliament thus, increasing legitimate democracy and government accountability. These changes could have substantial impact on Morocco’s future socio-economic and political development, as well as the nation’s role within the Arab world and the international community.
In theory, the new Constitution has potential to strengthen women’s legal rights and overall societal status and voice. The political reform is presumed to reinforce the presence of women in the state’s political structure and women’s equality to be recognized explicitly in civil and economic terms.
Wherein the previous Constitution it did not recognize gender equality in civil law, “the new constitution is pro gender in equality and anti-discrimination with a strengthened legal system” states Rabéa Naciri, former president of the Association Démocratique des Femmes du Maroc, one of the largest women’s rights non-governmental organizations (NGOs) in Morocco.

Morocco’s judiciary has previously consisted of a council of judges, religious scholars and politicians, who provide legal guidance based on the interpretation of a religious text. An independent judiciary, as proposed in the new Constitution, could have substantial consequences for the country’s women still experiencing injustice, violence and inequality.

A challenge yet is Morocco’s lack of human and financial resources required to grant women full access to justice, especially in rural areas. In addition, illiteracy, poverty, social issues and cultural practice remain evident barriers to women’s understanding of, and access to, the judicial system.
The national referendum on Friday July 1 was overwhelmingly approved by 98 percent of the voters with a 70 percent voter turnout. While most are supportive of the proposed measures, others are questioning the new Constitution; demonstrations and protests have been held by civil society and non-governmental organizations to ensure that the process and method of drafting the new Constitution does not compromise the quality and transparency of the actual outcome.

The February 20 Movement is one of the civil organizations that opposed the latest vote, disapproving of the fact that the reforms were drafted largely by advisers to the king. A Constitution drafted without any level of civil or stakeholder participation may lack in transparency. Several political initiatives have been taken by the monarchy. Yet the question remains of how genuine the state backing for reform and gender equality is.

Limiting the power of the King and his advisors brings about hope for changes that will be noted on the ground. However, as a King, Mohammad VI will still enjoy absolute control over religious matters, a constant obstacle for women seeking justice.

As the supreme arbiter, the role of the monarchy, is often positioned between the women’s groups, in alignment with liberal political forces, and that of conservative forces in Moroccan society.  To what extent the new Constitution will answer to the needs and wants of the people is contingent on what leg the monarchy will stand on.

Playing a meaningful role in the current constitutional reform is Morocco’s Women’s Movement:  drawing its strength from its documented history of contributing to reform and social change.  Previous civil efforts have contributed to significant changes such as the Family Law, or Moudawana, in 2004. The reforms granted women the right to divorce, protecting them from the traditional practice of repudiation, minimum age of marriage for women and men (raised to 18), as well as greater restrictions on the practice of polygamy. This marked a milestone in Moroccan society’s development and significantly improved the legal status of women.

Since the 1990s, Morocco has seen increasing political liberalization and the establishment of non-governmental organizations, filling the discrepancy between the state and the individual. Will the present involvement of women’s groups and liberal political prove vital in the transformation to a more open, modern and pluralist society?

Despite the crucial steps realized on the level of social rights and reforms in recent years, such as the appointment of several female ministers and/or Governors, the launch of a national initiative incorporating the gender issue as part of its strategy (2005), and the lifting of most reservations about the Convention on the Elimination of All Forms of Discrimination against Women (2008), Morocco still falls in the lower half of countries on the level of human development and gender equality. If further improvement in the legal status of women is to be realized, the necessity of gender equality needs to be applied to the law and incorporated as a corner stone in the new Constitution.

For the majority of the world’s women, “laws that exist on paper do not translate to equality and justice”, as stated by UN Women’s recent report “Progress of the World’s Women: In Pursuit of Justice”. Recognition of women’s rights needs to be applied to the work place, public sphere and general attitudes. Consequently, how the Constitution will be implemented and its changes reinforced are of eminence to real outcomes on the ground.
Moroccans are anticipative to what these changes will mean for them in their daily lives, as are the international communities and foreign policy experts hopeful that these reforms could become a model for future Arab monarchies facing uprisings.

With the possibility that the proposed new significant political reforms could bring about a fundamental change in the centrality of the monarchy in the previous status quo, the implementation of a new Constitution is a big step forward and a sign of progress. What needs to be ensured is that the reforms consider and incorporate all members of society and that no groups are left behind, especially those whose rights are currently limited.

*Lisa Ebba Laskaridis, a national of Sweden and Greece, is the Executive Coordinator and United Nations Representative of Olof Palme Peace Foundation, a New York-based, UN- affiliated non-profit organization that focuses on women’s rights in developing nations. She has previously worked with the UN Department of Public Information at UN Headquarters in New York. She is a contributor to Morocco World News.