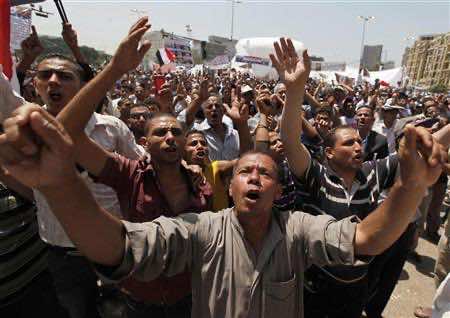 Egyptian Prime Minister Essam Sharaf said on Monday he would reshuffle his cabinet within a week, but crowds protesting at slow reforms and foot-dragging in prosecuting the ex-president said they were not satisfied.

Protesters rejected Sharaf’s statement on state television, in which he also said he had asked Interior Minister Mansour el-Essawy to speed up measures to restore security and order in Egypt, and threatened to continue their demonstration.

Four days of protests in Cairo’s Tahrir Square have brought traffic in the heart of the capital to a standstill.

Separate protests by hundreds of people were also under way in the Mediterranean city of Alexandria and the city of Suez. Many Egyptians say remnants of the ex-president Hosni Mubarak’s regime in the police and judiciary are trying to delay trials of those accused of crimes before the January 25 uprising.

Sharaf said he had decided to “conduct a cabinet reshuffle within a week to achieve the objectives of the revolution.” Some cabinet members, mainly technocrats, were appointed in the last days of Mubarak’s rule.

Protesters who listened to Sharaf’s speech on loudspeakers at Tahrir Square immediately rejected his gesture.

“We came to Tahrir (Square) and will not leave it because Mubarak and his regime have not been tried yet,” said Nader el-Sayed, a former football player who is among more than 2,000 people camping in the square.

Protesters in Alexandria put up a banner saying: “We reject Sharaf’s statement” and said they were considering escalating their protests.

Monday’s protests extended demonstrations for swifter reforms that began on Friday. Some protesters have camped out in Tahrir, erecting tents and canopies on traffic islands in the square.

The square was the heart of the movement that brought down Mubarak on February 11. Five months on, many Egyptians are frustrated that Mubarak’s trial has yet to start, though other Egyptians are tired of the protests that disrupt their lives.

A banner at one entrance to Tahrir read: “Revolution first and if needed we are ready to sacrifice with our souls whatever is precious for the revolution to continue and not be stolen.”

Mubarak’s trial is set for August 3, but protesters say the army has been reluctant to put the former president in the dock.

Former interior minister Habib al-Adli has been jailed for 12 years for corruption, but his trial over the killing of protesters continues. Protesters say the Interior Ministry has yet to be purged of officials who backed tough police tactics.

The Public Prosecution office, apparently trying to satisfy protesters, posted a list of the legal measures it had taken against senior officials of the Interior Ministry accused of killing protesters, including trial dates.

But that did not placate the protesters.

“I will continue to protest until the demands of the revolution are met. It is not fair that those who killed the protesters are still sitting in their offices … and have not been tried and sentenced yet,” said John Noshy, a 23-year-old student and one of the protesters in Tahrir on Monday.

Some Egyptians, frustrated by months of turmoil, have criticised protesters for again bringing the centre of the city to a standstill and for shutting off a vast administrative building that stands on the edge of the square.

“The protesters during Egypt’s uprising were accused of similar accusations,” Noshy said. “But when the revolution succeeded in removing Mubarak in 18 days, everyone said it was a great thing and that the protesters were good people.”

There was no sign of a police or army presence in the Tahrir Square area.