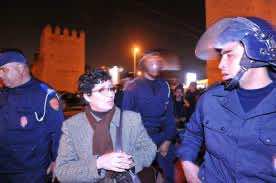 A human rights group on Tuesday said Moroccan authorities violated their obligation of impartiality by using religion and the media to promote a “yes” vote in the recent constitutional referendum.

“The use of mosques and [Islamic] brotherhoods as well as the state domination of media” during the referendum campaign amounted to “discrimination based on public opinion and an illegal use of public goods,” the Moroccan Human Rights Association (AMDH) said in a report unveiled at a press conference here.

More than 98% of voters backed the new constitution put forward by King Mohammed VI in a July 01 referendum after he faced pro-democracy protests inspired by uprisings throughout the Arab world.

Under the proposed reforms, the king is to remain head of state, the military, and the Islamic faith in Morocco, but the prime minister, chosen from the largest party elected to parliament, is to take over as head of government.

The new constitution also removes a reference to the king as “sacred”, though he would remain “Commander of the Faithful” and “inviolable”.

It would also guarantee more rights to women and make Berber an official language along with Arabic – the first time a north African country has granted official status to the region’s indigenous language.

The youth-based February 20 Movement, which organised weeks of protests to demand deeper reforms, had called for a boycott of the referendum as did three small leftist parties and a labour organisation.