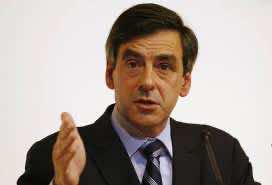 French Prime Minister Francois Fillon said on Tuesday that a political solution was needed in Libya more than ever, adding that he saw signs one was emerging.

“A political solution is more than ever indispensable and is beginning to take shape,” he told a parliamentary commission, which is expected to vote later in the day on whether to extend operations in Libya.

“At its last summit, the African Union confirmed that Gaddafi would not be able to take part in the political transition.”

Fillon added that France backed mediation efforts by Russia and the African Union.