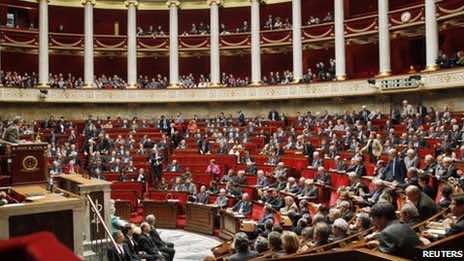 The French National Assembly has voted to pursue France’s participation in NATO operations in Libya, four months after the first airstrikes against forces loyal to Colonel Muammar Gaddafi. The debate now moves on to the Senate.

The French National Assembly voted Tuesday afternoon to authorise a continuation of France’s participation in NATO operations in Libya, four months after the first airstrikes were ordered.

The vote was 482 to 27, with several Communist and Green Party lawmakers voting against a continuation of France’s participation.

The parliamentary debate is required by a 2008 reform that stipulates that any military operation ordered by the French presidency must be evaluated and voted on by Parliament four months later. The Senate is expected to vote on the matter this evening.

Some of the debate revolved around the cost of the operation, especially in the wake of France’s decision to send combat helicopters in late May and weapons to Libyan rebels in early June.

“People were asking for assurances that it wasn’t going to go over budget,” reported FRANCE 24’s Tony Todd from the chamber.

But the decision to authorise the continuation of French military participation in Libya was backed on both sides of the political aisle, with Sarkozy’s centre-right UMP party and opposition Socialists widely viewing the effort against Libyan leader Muammar Gaddafi’s forces as legitimate.

France took a leadership role in urging military intervention in Libya in March. Prime Minister François Fillon opened the debate by reminding members of the National Assembly that Gaddafi had promised “rivers of blood” in the rebel stronghold of Benghazi. He also noted that “since the start of the mission on March 19, the military situation has been constantly improving”.

Socialist lawmakers nevertheless were critical of certain aspects of the operation, such as the coordination with NATO allies, and members of both parties called for clarification as to a foreseeable exit strategy for the operation in Libya.

Bernand Cazaneuve, a Socialist lawmaker who voted for France to continue its role in the operation, told FRANCE 24 while exiting the chamber: “It’s vitally important that everything France does is in strict accordance with the UN resolution. France needs to broaden its diplomatic effort to include a consensus with the Arab League and the African Union. Only then can we put the right kind of pressure on Gaddafi to leave or negotiate his way out quickly.”