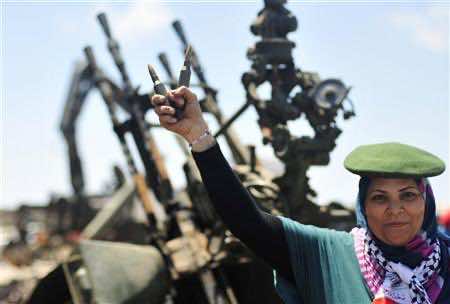 French lawmakers voted overwhelmingly on Tuesday to extend funding for the country’s military intervention in Libya after the prime minister said a political solution to end the crisis was taking shape.

Francois Fillon told the three-hour debate in the lower house of parliament that he saw signs a solution was emerging, and Foreign Minister Alain Juppe said envoys reported that Libyan leader Muammar Gaddafi was ready to leave power.

“A political solution is more than ever indispensable and is beginning to take shape,” Fillon told lawmakers.

“At its last summit, the African Union confirmed that Gaddafi would not be able to take part in the political transition,” he said, adding that France backed mediation efforts by that group as well as Russia.

France spearheaded the West’s military intervention in Libya but is growing impatient with its lack of progress and said this week that it is communicating with envoys from Gaddafi’s entourage to push forward a political solution.

Deputies in the National Assembly voted 482 in favour of the extension with just 27 opposing it. The Senate, also expected to vote in favour, decides later on Tuesday.

President Nicolas Sarkozy took a gamble by taking a personal role in supporting Libya’s rebels, but is now anxious to avoid costly military operations running into the start of campaigning for the April 2012 presidential election.

Underlining the restlessness in Paris were remarks by Defence Minister Gerard Longuet at the weekend, saying rebels should start direct talks with Gaddafi’s camp, as well as a report that Paris was negiotiating with him.

“Everybody is in contact with everybody. The Libyan regimeis sending messengers everywhere, to Turkey, New York, Paris. Juppe told France Info radio. “Emissaries are telling us Gaddafi is ready to go, let’s talk about it.”

France has spent some 160 million euros so far on its operations in Libya, which Fillon said involved 4,400 people, around 800 of which were based in France and the rest on foreign air bases or warships near Libya.

The opposition Socialist Party had signalled it would not oppose the extension, but said it wanted more intensive efforts to secure a political solution to the crisis and a new debate in September if the mission was not over.

French officials have denied any shift in position and say Paris has merely sent Tripoli messages via intermediaries making clear Gaddafi must relinquish power and withdraw his troops.

“There are contacts but it’s not a negotiation proper at this stage,” Juppe said on Tuesday.

Sources say the envoys are close aides to Gaddafi who are in contact with intermediaries reporting directly to Sarkozy.

“These are emissaries who say they are coming in the name of Gaddafi. What is important is that we send them the same message and stay in close contact with our allies on this,” French Foreign Ministry spokesman Bernard Valero told reporters.

France spearheaded the NATO-led campaign in Libya, along with Britain, under a U.N. mandate to protect civilians, and was first to launch air strikes against Gaddafi’s forces in March.

But after almost four months of bombing, international leaders are struggling to see an end to the crisis. Rebels hold large parts of eastern Libya and have loosened a siege of the city of Misrata, but are unable to make decisive moves towards the capital Tripoli despite strikes on Gaddafi’s forces.

Diplomatic sources close to the matter said on Monday that envoys from Paris and Tripoli had met in Paris, Brussels and Tunisia in recent weeks, but have made little progress.

Both Juppe and Fillon reiterated that Gaddafi had to quit, without saying if that meant he also had to leave the country.

Fillon told parliament the Libyan leader’s back was “against the wall” but stressed that the goal was not to eliminate him.

“We have not reached the breaking point yet. But it’s now that we need to be firmer than ever. And it’s now that the international community must show itself to be unbending.”

In an interview with French daily Le Figaro on Tuesday the Libyan Prime Minister Baghdadi al-Mahmoudi said Tripoli was ready to “negotiate without conditions” but the bombing must stop first. “You don’t create democracy under bombs,” he said.

Asked if Gaddafi could be excluded from a political solution, Mahmoudi suggested he could stand aside. “(He) will not intervene in discussions,” he said. “He is ready to respect the decision of the people.”

Karim Bitar, a Middle East expert at Paris-based think tank IRIS, said negotiations between the rebels and the Gaddafi camp were likely to be extremely complicated.

“It’s not a country where power is easily shared. There are 6 million people, a few powerful tribes and oil reserves almost all in just one area, so it won’t be easy to find a sort of an agreement where Gaddafi is on the sidelines and cedes power.”