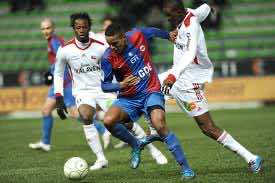 Morocco international, Youssef El-Arabi was in a rich vein of form in the 2010/2011 Ligue 1 season. The 24-year-old scored 17 goals and provided five assists to make sure that Caen stay in France’s top division.

The youngster was also attracting a lot of interest from Italian Serie A side Genoa, La Liga outfit Seville and English Premier League side Stoke City. Many believed that the youngster would take the next step in his footballing career by joining a club that would offer him European football.

However, it was not to be. In a bizarre turn of events, the youngster has chosen to join Saudi Arabian side Al-Hilal in shocking move. L’Equipe reveals that the youngster signed a four-year contract with the Saudi giants in Paris.

Al-Hilal have reportedly paid the Normandy club seven million Euros for the striker’s signature. Rumours suggest that El-Arabi will receive a lucrative salary at the club and his contract would make him one of the highest-paid earners in the Saudi league.

The choice of El-Arabi to join the Middle-Eastern club is definitely a shocking one as the youngster had a great European career in front of him. At the age of just 24, the youngster should have done well in securing a move to a European club in order to further develop his skills.

Rumours suggest that El-Arabi might have been lured to the Asian club due to the wages offered by the Saudi club – something that he might have not even dreamed of earning had he secured a move within Europe.