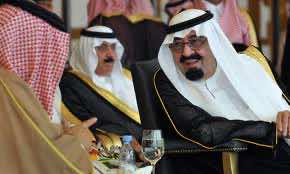 DUBAI  – Saudi Arabia has helped damp down democracy movements sweeping the Arab world but is waiting now to see how events play out in places like Syria and Yemen for fear of overplaying its hand.

After witnessing the sudden collapse of rulers in Egypt and Tunisia this year, the Al Saud family that monopolises power in Saudi Arabia orchestrated Gulf Arab moves to stop the unrest from spreading through the Gulf region.

They offered money to Oman and Bahrain for more social spending, and Qatar’s Al Jazeera TV toned down its hard-hitting Gulf coverage after meetings between Saudi and Qatari officials.

Riyadh was the prime mover behind a Gulf Cooperation Council (GCC) proposal to enhance relations with Jordan and Morocco in an apparent effort to boost other Arab dynastic systems. A Saudi official said Jordan was given $400 million (251 million pounds) last month.

In March and April it also brokered a peace deal in Yemen, a republic different in size and social make-up to the GCC countries, that was to see President Ali Abdullah Saleh step down one month after forming a cabinet.

Yet following that flurry of interventions, Saudi diplomacy has largely gone quiet, most notably on two fronts where Riyadh has major interests — Yemen and Syria. Its response also has been muted in Libya, a more distant concern for Riyadh.

Analysts and diplomats say there are disputes within the ranks of senior princes and officials on whether to take a back seat, intervene more forcefully to stop democratic changes or, in some cases, to back them.

Turki Al-Rasheed, a Saudi commentator who runs the Saudi In Focus web forum, said the kingdom’s leaders had run out of ideas on how to challenge the movements amid internal disputes and given the lethargy of senior princes holding different briefs.

“They are quiet because they did something and it failed. Bahrain is still boiling. The only card now is to pay the Americans billions for their weapons,” he said, referring to reports that $60 billion in arms purchases from the United States would rise to $90 billion.

The ruling Al Khalifa family has instituted a national dialogue in Bahrain, but protests continue in neighbourhoods of the majority Shi’ite population, who dominated the protest movement. Demonstrations rekindled in Oman last week.

Saudi Arabia has seen only a small number of protests in Shi’ite areas of its Eastern Province. Stern government warnings and promises of massive social spending have helped hold back a protest movement taking off on its soil.

“There is no one single Saudi policy. Each issue is handled from a different point of view and they (the princes) are all very old and sick,” Rasheed said.

One Saudi commentator who did not wish to be named said there has been division over how to proceed on Yemen. Interior Minister Prince Nayef backs Saleh while Crown Prince and Defence Minister Prince Sultan favour alternatives among tribes paid by the kingdom.

However, Sultan, in his 80s, left last month for treatment in New York and Nayef, in his late 70s, also has been abroad for rest and recreation.

Saleh has been convalescing in a Riyadh hospital since early June when he was badly burnt in an apparent assassination attempt. A bomb went off as he and government officials were performing Friday prayers in a mosque at his palace.

But Riyadh has made no clear effort to enforce the GCC peace initiative, which Arab and Western diplomats say was largely a Saudi proposal from the beginning.

Ghanem Nuseibah, London-based analyst at Political Capital, said the Saudi family’s first preference for Saleh to remain in power had given way to promoting Hamid Al-Ahmar, a 44-year-old businessman close to U.S. officials.

The Saudi ideal is for Saleh’s system of family rule, balancing Saudi-backed tribal forces, to remain intact. This is exactly what the democracy activists who first took to the streets of Sanaa in January want to avoid.

But fighting between tribesmen of Sadeq Al-Ahmar, head of the Hashed tribal confederation, and government forces loyal to Saleh — whose military and security apparatus are headed by his extended family — broke out in May. This confounded Saudi efforts at that stage to engineer cosmetic change.

Now Riyadh is holding on to Saleh while it weighs its options on who can be the most effective strongman among the tribes it funded during Saleh’s 33 years of rule, Nuseibah said.

“They see the way the Saudis have reacted since the beginning,” he said. “First they were pro-Saleh, then they bring Saleh to Riyadh but still letting him be a figurehead for the current regime, though he is not personally ruling.”

HOLDING ON TO ASSAD

Saudi relations with Syria have been strained since the murder in 2005 of former Lebanese prime minister Rafik Hariri, a Saudi citizen and facilitator of Saudi policy in Lebanon where Iran has influence through Shi’ite group Hezbollah.

Riyadh accuses Syrian leader Bashar al-Assad of helping Iran in a policy of extending its influence in Arab countries, primarily through its alliance with Lebanon’s Hezbollah.

But while Al Jazeera and Saudi mouthpiece Al Arabiya TV have focussed heavily on Damascus’s attempt to crush protests, there have been no diplomatic initiatives to resolve the conflict, as France, Turkey and the United States have dominated international reaction to the turmoil in Syria.

Some Saudis say this is not because the ruling clique — King Abdullah, Nayef, Sultan and a few other senior princes — do no want to see Assad removed from power.

“With Libya and Syria, I’m sure the government would like to see those leaders fall, but in their own time, without getting involved,” the Saudi commentator who requested anonymity said.

“Naturally Saudi Arabia, being a kingdom, sees any sudden change in power that’s now happening in the Middle East as a threat that might be contagious at some point,” he added.