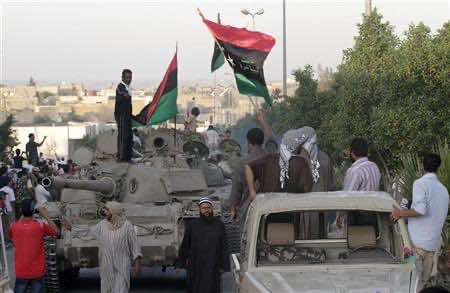 AL-QAWALISH, Libya – Forces loyal to Libyan leader Muammar Gaddafi on Wednesday tried to re-take a village south of the capital seized by rebels a week ago, delivering a set-back to rebel plans for a march on Tripoli.

The fighting in the village of Al-Qawalish, about 100 km (60 miles) from the capital, underlined the faltering pattern of the rebel advances that has led some of the rebels’ Western backers to push for a political solution to the conflict instead.

A Reuters team in the village heard small arms fire and shelling and could hear explosions from shells landing inside Al-Qawalish on its eastern edge.

Several truckloads of rebel fighters sped west out of the village, away from the attacking government forces, with one shouting: “Go, go, it is not safe here!”

One rebel fighter said the fighting started after a rebel unit tried to advance east from Al-Qawalish in the direction of the town of Garyan, which controls access to the main highway leading north into the capital Tripoli.

Another fighter, on the western edge of Al-Qawalish, said: “We ran out of bullets and we had to pull out.”

The conflict in Libya started out as a rebellion against Gaddafi’s 41-year-rule. It has now turned into the bloodiest of the “Arab Spring” uprisings convulsing the region and has also embroiled Western powers in a prolonged war they had hoped would swiftly force Gaddafi out of power.

The Libyan leader is refusing to quit and the rebels have been unable to make a decisive breakthrough towards his stronghold in the capital despite support from Western warplanes.

France said on Tuesday a political way out of the conflict was now being looked out, and that Gaddafi’s emissaries have been in contact with NATO members to say he is ready to leave power.

“A political solution is more than ever indispensable and is beginning to take shape,” French Prime Minister Francois Fillon said in Paris.

But it was not obvious how negotiations could persuade Gaddafi to change his mind and relinquish power, especially at a time when the Western alliance ranged against him is showing signs of wavering.

French President Nicolas Sarkozy is under pressure to find a quick solution. He gambled by taking a personal role in supporting the rebels, but is now anxious to avoid costly military operations running into the start of campaigning for the April 2012 presidential election.

Washington expressed doubts about peace overtures from Gaddafi emissaries. A State Department spokeswoman said the “messages are contradictory” and there is no clear evidence “Gaddafi is prepared to understand that its time for him to go.”

Revealing fresh strains inside NATO about the cost and duration of the Libyan operation, British Defence Minister Liam Fox said other alliance members were not pulling their weight and described some states’ contributions as “pathetic”

“If they want the insurance policy, they should perhaps think about paying the premiums,” he said at the Royal United Services Institute defence think-tank in London.

The rebel National Transitional Council, based in the eastern Libyan city of Benghazi, received a diplomatic boost on Wednesday when Belgium, Luxembourg and the Netherlands recognised the council as Libyans’ legitimate representative.

The Benelux countries join more than 20 countries who have already granted the council recognition.