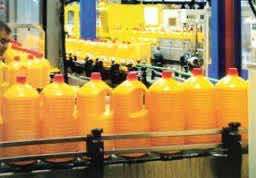 National Investment Company, or SNI, said it sold a 41 percent stake in Lesieur Cristal (LESU.CS) to Sofiproteol for an average 115 dirhams ($14.3) per share, which represents a 1.5 percent premium over Lesieur’s closing price on Tuesday, before the sale was announced.

Traders said SNI, which has come under the scrutiny of pro-democracy protesters in recent months, made a good deal, considering Moroccan social and political constraints that make it difficult for producers of staples to raise prices to reflect higher global commodity costs.

The sale is the first of what is expected to be a series of transactions involving SNI stakes in the country’s leading firms, such as AttijariWafa Bank (ATW.CS), dairy firm Centrale Laitiere (LAIT.CS) and Morocco’s sole sugar refiner, Cosumar (CSMR.CS).

“This (sale) is part of the reorganization that ONA-SNI announced in March 2010, resulting in a change from a status of a conglomerate active in various industries to that of an investment portfolio holding,” SNI said.

“This transaction allows Sofiproteol to continue its international expansion strategy, which focuses on the Mediterranean basin in particular, allowing it as a result to become a leader in Morocco’s edible oil market,” it added.

SNI held a 76 percent stake in Lesieur before the deal with Sofiproteol. It said it plans to sell its remaining 35 percent stake to long-term institutional investors and through public offering in the Casablanca bourse.

SNI and its subsidiary ONA last year began a merger process and later delisted from the Casablanca bourse to pave the way for the transfer of ONA assets to SNI and the later sale of some of those assets. [ID:nLDE62P130]

The sale coincides with continuing but limited protests that started in February demanding a parliamentary monarchy and that King Mohammed reduce his business clout.

SNI’s 2010 net consolidated profit accounted for 27 percent of total net profits by firms listed in the Casablanca bourse. There are no official figures on the size of the Moroccan royal family’s stake in SNI, but market sources put it at around 60 percent. SNI officials decline to comment on the matter.

SNI has come under greater public scrutiny amid the protests, which also demand a separation between power and money and lower wealth gaps in a country with high poverty and illiteracy rates and an ingrained deference toward the king.

The protests have also raised concerns about investor risk in Morocco and the potential impact on the sale of SNI’s assets, a risk SNI executives have downplayed.

“SNI made a good deal. It sold Lesieur at 20 times 2010 profit and 17 times the 2011 profit, which the market expects to grow by 20 percent. This forecast, however, now appears difficult to be meet, given the surge in global oilseed prices,” a Casablanca-based trader said on condition of anonymity.

“The edible oil market in Morocco is fully liberalised, but edible oil producers cannot automatically reflect increases in oilseed global prices on the prices of their product because of social and political considerations,” the trader added.

Another trader said the small premium in the deal “appears to be justified by the control Sofiproteol gains over Lesieur.” He said Lesieur holds a 41 percent market share of Morocco’s edible oil market. SNI declined to comment on the figure.

King Mohammed, 47, preempted the escalation of the protests, which were inspired by the Tunisian and Egyptian revolts, by floating constitutional reform and pledging to enforce economic fair play.