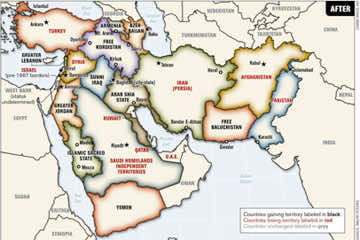 The so-called ‘Arab spring’, which started as a wave of anti-government riots in Tunisia and Egypt, is now developing in full accordance with the US scenario, its main aim being to reshape the geopolitics, which the Bush administration once described as ‘The Greater Middle East’ plan.

Emphasis is made on maintaining instability in this region through its gradual territorial division. In case of success, the allies of the US in Western Europe might get a chance to control huge energy resources and energy routes thus preventing other countries from having their own zones of influence on territories expanding from Morocco and Algeria to western Indonesia and the Philippines. This tactics were previously successfully used in the Balkans.

A new national security strategy unveiled by the US administration proves that we`ve entered a new stage of the Arab revolution. First Barack Obama’s assistant for counterterrorism and homeland security, John Brennan said that Washington was going to deepen ties with governments in Yemen, Somalia, Iraq, Pakistan and North Africa. Then the US Secretary of State Hillary Clinton elaborated which ‘governments’ they were talking about: The Society of the Muslim Brotherhood, or simply ‘The Muslim Brotherhood’ Islamist organization, which has long been seeking power in Egypt, is one of them. “We welcome…dialogue with those Muslim Brotherhood members who wish to talk with us”, Mrs. Clinton said, without mentioning however terrorist roots of this group and its links to Al-Qaeda, as well the US ban on any contacts with the Brotherhood. But now the US officials are allowed to cooperate with members of this Islamist party which was founded in 1928 with the main goal of ‘reclaiming Islam`s manifest destiny, an empire, stretching from Spain to Indonesia’.

A similar scenario the West is now being implemented in Libya. There the US chose to cooperate with the Libyan Fighting Group (LIFG), founded in 1970 as a radical faction against Muammar Gaddafi`s regime. In the middle 1990s LIFG joined Al-Qaeda, and their unity was officially confirmed in 2007. As of today, the LIFG has a kind of a political wing- the Libyan Islamic Movement for Change which is seeking leadership among the opposition in Benghazi and receives active support from the US, France and NATO. Cooperation between the West and Islamists is also quite active in Syria, where radical groups are supposed to play a crucial role in toppling the Bashar Assad regime.

It is worth mentioning here how the West had been developing its attitude to the Albanian Kosovo Liberation Army (KLA). In 1998, when the Kosovo conflict went beyond international control, the then US special envoy to the Balkans, Robert Gelbard, said that the KLA was ‘without doubt, a terrorist group’. However, it did not prevent Washington from cooperating with it while attempting to strengthen its positions in Kosovo and everywhere in the Balkans. After all, the former British Foreign Secretary Robin Cook, who also stood behind the ‘new Kosovo`s architecture’, would say that ‘KLA rebels were as cruel as any other insurgents in history’. Today these ‘insurgents’ can be found in Benghazi- they are members of different Islamist groups. Probably, their names were mentioned during the recent African Union summit, when France was warned that the arms it was supplying to the region could be seized by Al-Qaeda.

Zbigniew Brzezinski once referred to the territories of North Africa, the Middle East, the Caucasus, the Central Asia as “Eurasian Balkans”. He said that these ‘Eurasian Balkans’ were located on both sides of the major transport route, which was supposed to link the richest regions of Eurasia with the best industrial areas of the West and the most distant areas in the East which are geopolitically important. Nowadays tactics once used in the Balkans are being widely applied almost all over the world. If a century ago the thorniest conflicts in the Balkans were settled by superpowers “as their territorial claims in the Balkans, the Mediterranean and the Middle East”, now we are witnessing a different thing: the Balkan scenarios serve as a starting point for the process of reshaping a huge region rich in energy resources.

The views expressed in this article reflect the author’s opinion and do not necessarily reflect those of Morocco World News.