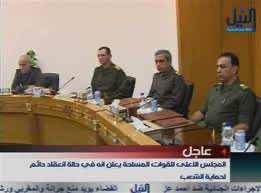 The Supreme Council of the Armed Forces has issued its first public statement on Tuesday since the mass protests that swept all over Egypt last Friday.

El-Fangari said the council is still committed to a transitional plan of holding parliamentary elections, followed by the drafting of a new constitution and presidential elections at a later point in time.

For the first time, the council announced that it intends to issue a new “Constitutional Declaration” in which the basic principles of the constitution, which is to be drawn by a constituent assembly chosen by parliament, are set out.

The statement also stressed the military council’s support for Prime Minister Essam Sharaf who has been facing serious challenges in recent days from revolutionaries accusing his cabinet of doing little to meet the revolution’s goals.

Hegazy said that the military council has no intention of using force against the demonstrators so long as they uphold the law.

He added that the armed forces’ commitment to not use violence against the people was intrinsic to Egyptian military doctrine, “our officers are brought up on this doctrine, we are educated in this doctrine.”