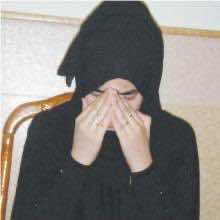 JEDDAH – Government and social bodies here are investigating claims of a 23-year-old Moroccan woman that she was being forced to work as a prostitute in the city.

The Bureau of Investigation and Prosecution (BIP) in Jeddah is considering the matter involving the woman named Elham. Other bodies involved are the Permanent Committee for Anti-Human Trafficking and the Human Rights Commission (HRC)

Elham told Okaz/Saudi Gazette she had arrived in the Kingdom on Feb. 22, 2011 to work as a receptionist at a dressmaking shop in Jeddah. On her arrival she was met by an Egyptian woman, nicknamed Umm Hamada, who accompanied her to an apartment shared by two Moroccan women, Donya and Kawthar

When she inquired about the work she was told that the shop was swept away by the floods and she had to wait. She said she never met her sponsor and only dealt with Umm Hamada

Elham later found out that Donya’s flat was a brothel and Kawthar was using liquor, hashish and prostituting herself

Elham said that she refused to become a prostitute and told them she would not do any work that would displease Allah. She only wanted to make money to help her sick mother back home

Umm Hamada then told her that she would have to pay SR27,000 to her sponsor, which was the purported cost of bringing her to the Kingdom. The women also started beating her and burning her with cigarettes.
At this point, she said she decided to escape. She claimed that when Kawthar and Donya wanted to grab her, she resisted and jumped from an open window

She said the incident took place on March 10, 2011 and she sustained compound fractures in her legs and pelvis. The incident was registered at Al-Nuzha Police Station in Jeddah

Elham is currently convalescing at King Fahd Hospital in Jeddah. The hospital has recommended her transfer to the Social Protection Asylum where she can be accepted without official documents

Abdul Moughaith Al-Ghassmeri, the Moroccan Consul General, said he was briefed on the woman’s condition and contacted her family. He said the general prosecutor had told him the case was still under investigation.