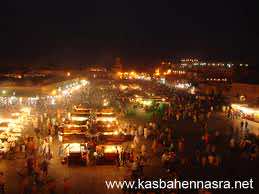 There’s something missing in Marrakesh. For those of you unfamiliar with this quite attractive Moroccan city, it is the Las Vegas of Morocco. It’s where rich Moroccans come to forget they are both Muslim and Moroccan; and it’s where millions of tourists have flocked to walk around with an incredibly stupid smile on their faces, as though being in Marrakesh with a third degree sunburn is in itself two remarkable things which can happen to a moronic European, who believes that he has left the path of conventional holidaying and entered the heart of darkness by jetting in directly from a provincial European city with an 80 Euro ticket and a head full of idiotic ideas about the “Arab World.”

It is beautiful, rich with heritage, clean and quite proud of its libertarian reputation, which some conservative Moroccans might dismiss as “degenerate,” but which Westerners love. Yes, the free-spirited, anything-goes Marrakesh boasts homes to many celebrities, including Mick Jagger, and often lives up to its off-the-shelf sloppy journalist cliché of being a den of iniquity: sex parties, drugs and Arabian girls apparently.

Well, needless to say, your humble correspondent has never fondled this particular underbelly to the “red city.” Oh yeah, the thing that’s missing? Tourists. Normally they are here in droves, cluttering up the place and generally kitching it out with their sunburnt skin, stupid shorts and braided hair. I mean, is there a chain in Paris called Shiite Tourist Clothes R US? Why do people feel they need to wear baggy T-shirts and khaki shorts which end below the knee? And as for the silly hats and sandals that are supposed to be part of what some people think is a desert experience?

What’s the matter with these people? Haven’t they read “A Passage To India”?

It’s true I do look like a freak dressed like an English gentleman in the tropics, but a chap who doesn’t wear brogues, “blanc casse” cotton trousers (no center crease) and a long sleeved shirt in any heat is frankly not a chap at all. Tattoos need to be covered up as well. Well, people with tattoos might want to consider just leaving the county. Someone needs to tell Fritz or Christophe. It is part of my bigger plan in Morocco to create a taste police to bust Europeans who think they are doing everyone a favor by dressing like a flower power twat, complete with “I Love Marrakesh” T-shirt and tie-dye freakery.

But seriously, the writing’s on the wall. Morocco’s problems are not complicated. We don’t need an ex Chairman of British Aerospace to shoot a TV documentary examining Morocco’s conundrums. No Sir Lee Harvey required with his silly long hair, sweating like an Albanian rapist doing his little pieces to camera of why your company is going to be bankrupt in less than 6 months. Any unwashed, ranting Fev20 maniac who managed a dodgy diploma in one of the numerous unrecognized “universities” on Casablanca’s Boulevard Mohamed V will tell you that all of the country’s woes can be solved with wonga. And not the pathetic brown envelope that those endearing people in the European Commission in Brussels give Rabat each year for its ever-so-nice education programs, helping the socially excluded, women’s groups [oh someone fire a blow dart at me now as I’m off on one]. Yes, Morocco is Brussels’ star pupil in the region in what the EU calls its “EuroMed” group of countries, which, comically, er Syria is also a member of but let’s leave that particular cauldron of boiling amazon maggots for another rant, another day.

Back to Morocco and what it needs. Hundreds of millions of dollars to solve it socio/economic problems. Yep. You’re ahead of me and you’ve worked out that this semi-educated hack doesn’t really know what that means. But I do. I do. It was explained to me by a terribly clever young man of the youth movement Fev20. It’s all about jobs. If someone can come up with the formula to create employment here, all these youngsters having their Sunday bed wet in the streets of Casa will go away. They’ll be too busy washing their newly acquired jalopies or chasing skirt. Sure, even extremists have needs. Extreme Needs, in fact. I’ve just invented a new game Arab TV game show. Shut up, Jay.

Jobs are key. And we don’t need to waste precious Euros in Rabat bunging one of those high brow management consultancies to know this, as Mr. Obama has already told us in numerous speeches that in the US economy all the new jobs are created by start-up companies. This is what we need in Morocco. A new wave of confidence and assistance to encourage more and more European Moroccans to bring back their welfare checks, er, I mean, hard earned Euros from Belgium and France and start businesses. The foreign minister himself told me in 2008 that a big part of the Moroccan economy in future years will be money sent back from European Moroccans, which is all part of the big picture of getting a better immigration deal with Brussels about the two-way traffic of human cargo in and out of Europe.

Anyway back to Marrakesh and that tumbleweed blowing across its main square. There is no question in my mind as to what Morocco’s quickest and most obvious asset is, in terms of attracting Euros: its cultural heritage, of course. Marrakesh is beautiful and is surrounded by stunning mountains and spectacular country. Tourism surely is where it starts. The town itself is also quite special. If you’re a bit bored of yet another beautiful f—–g mountain, you can always bolt back to any number of extreme hedonistic nightclubs in the center, where, I am told, anything goes. Apparently there is a club called Theato, which I have yet to explore, but I am told —- [insert appropriate cliché of middle aged European man losing his mind in a vortex of Arabian velvet mousetrap here].

Leaving any absurd ideas of underhand [or is that under table?] sexual encounters with Morocco’s finest and fittest aside, the fact remains that there are no tourists in Marrakesh. This might have something to do with the temperature climbing now; and Tracy from Luton, or Catherine from Calais can’t deal with heat above 35 degrees C. And in just another two weeks’ time it will be closer to 40 with a fair amount of humidity as well, which officially makes it the tourist season for well-off Moroccans around the country to completely take over the place. Think loud Americans staying in half price, half board 5 star hotels but smuggling in supermarket coke to the swimming pool area. Or worse, European Moroccans who make loud Americans look almost civilized. European Moroccans need to be heard. They need everyone in a 200-meter radius to know that they live in France. That is why they drive 6,000 miles round trip in a Renault Megane hire car, after all.

There’s another reason though why the tourists are not coming this year. The Marrakesh bombing on April 28, which killed 20. It doesn’t help your tourist sector someone setting off a bomb that wipes out innocent Europeans. But the response by the authorities to try and restore confidence in Morocco – now that we know the bomber was not commissioned by Al Qaeda’s North Africa arm – is somewhat shocking.

It seems a no brainer. But I am told Morocco’s tourist minister actually does have a brain. In fact I hear he’s young, articulate and really quite sharp. Yet if he were to appear on the UK game show “Who Wants To Be A Millionaire?” and asked the following question, I wonder if he would need to call a friend.

Question: Following the Marrakesh bombing, what is the best way you can entice tourists back and assure them that it will never happen again?

(a) Spend ridiculous amounts of money trying to attract foreign investment in New York with the latest agricultural fad;

(b) Spend $500,000 of tax payers’ money contributing to the Mewazine pop concert with Shakira top of the bill;

(c) Spend about $100,000 of completely kitting out the whole of Marrakesh with clearly visible CCTV cameras and get those lovely people at EuroNews to make a mind-numbingly boring 8-minute news report on it

(d) None of the above

It was in fact the hotel manager of the Sofitel in Marrakesh who, during an interview for a report I was making at the time on Morocco’s special EU status, complained bitterly about the ministry of tourism and how it was so far behind the private sector.

“Look, we have everything here in terms of standards, but these guys in Rabat are not only dreaming about 10 million visitors….but they are also dreaming too small. Why not 20 million like Turkey?” he asked with wild eyes.

I might have taken him more seriously but at that moment I took a huge gulp out of my large gin and tonic which one of his waitresses brought seconds earlier…only to discover soda water was used by mistake. It was not the typical “spit or swallow moment” which I had expected to be presented with in a 5-star hotel in Marrakesh.

Will someone please tell the tourism minister that he needs to work more closely with European cities that have experienced similar acts of terrorism. London and Madrid spring to mind. London was teaming with cameras before the July 7 bombing, which caused some civil liberty debates to boil up occasionally. But not since the bombing in 2005, as it was CCTV cameras that helped catch the culprits. And it is CCTV cameras that Tracy, Catherine, Fritz and Christophe need to see now in Marrakesh. They need to feel special. Or doesn’t anyone actually read their T-shirts?

(Martin Jay is a veteran foreign correspondent currently based in Morocco. He can be reached by email at: [email protected])