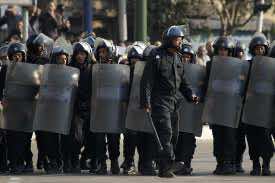 Interior Minister Mansour El-Issawi meets a key demand of protesters camping out at Cairo’s central Tahrir Square and other vital squares in the Egyptian cities. He declared on Wednesday that nearly 600 top police officers were fired as part of cleansing the discredited and widely unpopular force, state television reported.

The protesters want the police force to be purged of Mubarak loyalists and officers involved in the killing of nearly 900 protesters during revolution that toppled Hosni Mubarak’s regime in February.

Among those dismissed were 505 major-generals and 82 brigadiers, the report said.

El-Issawi explained that this movement is the largest movement to assign  new administrative leaders in all sites of the police and  “to inject new blood to suit the approach of police work in the current stage in order to be consistent with the objectives and principles of the 25th January revolution .

El-Issawi pointed out that the movement tried to make the greatest possible balance of reconciliation of the needs of public opinion and the requirements of good security and efficient management of work in various locations.

We will not prejudice the security requirements of the work in the sensitive phase of the country, he added.

He stressed that the first priority of the Ministry of Interior in this delicate stage of the history of Egypt will be to raise the slogan of “security first”.