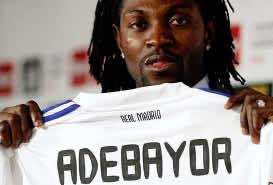 Manchester City striker Emmanuel Adebayor is waiting for Real Madrid coach Jose Mourinho to call so he can return to the club where he had a successful loan spell last season and has ruled out moving anywhere else.

The Togo international told Thursday’s Spanish sports daily As he would “get on the first plane to Los Angeles” where the Spanish club are on the opening leg of a pre-season tour.

“I am not interested in looking for any other move that is not going back to Real Madrid,” said the 27-year-old, who slipped down the pecking order at City after they signed Bosnian striker Edin Dzeko in the January transfer window.

“I am waiting for his (Mourinho’s) call and I hope it comes. If it was up to me I would play three or four years for Madrid and then retire in the white shirt.”

Adebayor, African Player of the Year in 2008, moved to Real in January as cover for the injured Gonzalo Higuain and scored on his home debut against Sevilla in a King’s Cup semi-final.

He netted twice against Tottenham Hotspur in the Champions League and scored a La Liga hat-trick against Almeria, helping lift his overall tally to eight goals in 22 appearances.

Mourinho said this week that big-spending Real were still in the market for a forward and hinted Adebayor was more likely to fill the gap than potential targets Sergio Aguero of Argentina and Brazil’s Neymar.

Adebayor told As Mourinho was “without doubt” the best coach he had worked with.

“I would say to him: ‘Here I am if you need me’,” Adebayor said. “He gave me the confidence I was lacking, he made me believe in myself and enjoy football again.”