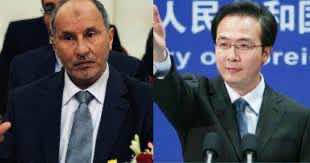 China said on Thursday that it would skip a meeting in Turkey this week between Western powers, Arab governments and leaders of Libya’s opposition National Transitional Council, saying that the way the group worked needed “further study”

Istanbul is set to host the contact group meeting on July 15 as part of an international effort to bring stability to a post-Gaddafi Libya.

“But because the function and method of operation of this contact group need further study, China will not be attending this meeting,” he added, without elaborating.

While China did not use its veto in March to block a U.N. Security Council resolution that authorised the NATO bombing campaign against Libya, it then quickly condemned the strikes and has repeatedly urged a ceasefire and compromise between the government and rebels.

China has recently met both Libyan government and rebel representatives, and Beijing has said this is part of an effort to encourage a negotiated end to the fighting.

But by courting the Libyan rebels, China has departed from its usual reluctance to entangle itself so deeply in other nations’ affairs.

NATO’s three-month-old bombing campaign has so far failed to dislodge the Libyan leader Muammar Gaddafi, straining the Western alliance. But Britain, France and the United States say they will not stop until he falls.