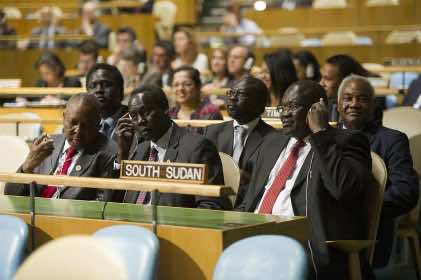 The General Assembly today admitted the Republic of South Sudan as the 193rd member of the United Nations, welcoming the newly independent country to the community of nations.

South Sudan’s independence from the rest of Sudan is the result of the January 2011 referendum held under the terms of the 2005 Comprehensive Peace Agreement (CPA) that ended the decades-long civil war between the North and the South.

“At this moment… in this place… the world gathers to say in one voice: Welcome, South Sudan. Welcome to the community of nations,” Secretary-General Ban Ki-moon said at the meeting.

Mr. Ban, who was among the UN dignitaries that attended the independence ceremony in South Sudan’s capital, Juba, last Saturday, pledged the world body’s assistance as the country shapes its future. “The commitment of all Member States will be essential as South Sudan moves forward,” he stated.

“Together, let us say to the citizens of our newest Member State: You now sit with us. We stand with you.”

“Today we are firmly entrenching South Sudan in the community of nations in the same way as other Member States with the same rights and responsibilities. The universality of the United Nations and the values that are enshrined in its Charter are thereby enhanced,” he stated.

“I am confident that South Sudan will contribute to promote the objectives of security, peace, prosperity, friendship and cooperation between peoples as they are promoted by the United Nations, and this for the good of the people of South Sudan, for the good of the region and for the entire African continent.”