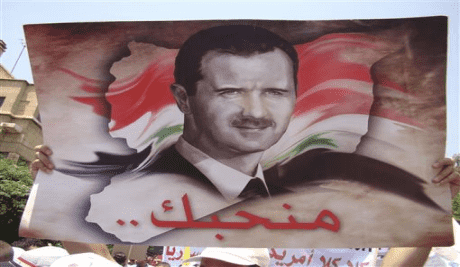 * Protests daily in main square, where statue once stood

AMMAN – Syrian forces killed two people on Thursday when they fired at a pro-democracy protest in the provincial capital of Deir al-Zor, residents said.

The incident was part of an escalating crackdown against dissent in the tribal region bordering Iraq’s Sunni heartland.

Military Intelligence agents also injured seven protesters who had gathered in the main square of the city on the Euphrates river in the remote northeast.

A statue of President Bashar al-Assad’s brother Basel had stood in the square but security forces removed it two months ago to stop demonstrators smashing it.

“A crowd of 1,500 had shown up for the usual noon demonstration despite the intense heat. Thousands more have descended on the square after the killings, and there are now around 10,000 people there,” said one witness, a computer programmer who declined to give his name for fear of arrest.

Despite being the centre of Syria’s modest oil production, Deir al-Zor is among the poorest regions in the country of 20 million people.

Little oil revenue is invested in the desert area and water shortages over the last six years, which experts say have largely been caused by mismanagement of resources and corruption, have decimated agricultural production.

This has weakened support for the Assad family, which has ruled Syria with an iron fist since 1970, among Sunni tribes in Deir al-Zor, whom the authorities had allowed to carry arms as a counterweight to a Kurdish population further north.

“It is very difficult to hit those pipelines with more troops deploying in Deir al-Zor lately. People suspect the regime is behind the attacks to discredit the democracy cause after months of peaceful demonstrations,” Sheikh Nawaf al-Khatib, a prominent local tribal leader, told Reuters by phone.

Assad, from Syria’s Alawite minority sect, an offshoot of Islam, is struggling to put down widening demonstrations in rural and tribal regions, in suburbs of the capital and in cities such as Hama and Homs demanding an end to his autocratic rule.

Mass arrests and the heavy deployment of security forces, including an irregular Alawite militia known as shabbiha, have prevented protests in central Damascus and the commercial hub of Aleppo.

The killings in Deir al-Zor came as ultra-loyalist army units expanded a military campaign to crush dissent against Assad in the northwestern province of Idlib bordering Turkey.

Four villagers were killed on Wednesday in tank-backed assaults on at least four villages in the Jabal al-Zawya region in Idlib, activists said.

“We are seeing a military escalation following the regime’s political escalation,” the activist in Idlib, who declined to be named for fear of arrest, told Reuters by phone.

He was referring to the arrest of thousands of Syrians in a crackdown that has intensified in the last two weeks, according to human rights campaigners.

Among those arrested was physician Ahmad Tuma, a respected opposition leader from Deir al-Zor, who was abducted from his clinic by Military Intelligence agents last week, his friends said.

They were among a group of artists who issued a declaration this week denouncing state violence against protesters and demanding accountability for the killings of civilians and the release of thousands of political prisoners held without trial.

This month, singer Ibrahim Qashou was found dead in the Orontes river in Hama with his throat slit, residents said. He had composed a song entitled “Assad leave”, which was repeated by hundreds of thousands of protesters in the city.

The attack was reminiscent of assassinations of Assad family critics in the 1980s inside and outside Syria.

International powers, including Turkey, have cautioned Assad against a repeat of massacres from the era of his father, the late President Hafez al-Assad, who crushed leftist and Islamist challenges to his rule.

The U.S. and French ambassadors visited Hama in a show of support on Friday. Three days later their embassies were attacked by Assad loyalists. No one was killed in the attacks which were condemned by the United Nations Security Council.