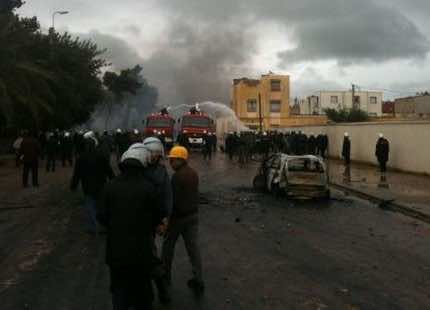 RABAT- Protesters have ended their blockade of a railway line used to transport phosphates in Morocco, after promises they would be reconsidered for jobs at the state-run phosphate monopoly (OCP), official media said on Thursday.

Over the weekend, dozens of protesters started blocking a rail link between phosphate mines in the town of Youssoufia and chemical plants in the city of Safi operated by OCP, or Office Cherifien des Phosphates.

Riots broke out in March in the same province and OCP said then that registered applicants would be given training courses within a few weeks.

The official MAP news agency said the Youssoufia protesters had agreed to lift the rail blockade after labour ministry, OCP and local representatives promised to reconsider their job applications.

“Dialogue … has allowed the sit-ins to end and the resumption of rail traffic between Youssoufia and Safi as well as the flow of trucks … unblocking the flow of phosphate transportation trucks and buses for OCP’s employees,” MAP said.

The Safi complex can produce up to 400,000 tonnes of phosphoric acid and fertilizers.

OCP said last week the number of job applicants exceeded 36,000. The company was providing 5,800 jobs immediately and would give paid training to an additional 15,000 before enrolling them. [ID:nLDE7661ME]

A source familiar with the matter said recent protests in Youssoufia did not have any commercial impact.

“The Youssoufia protesters will be reconsidered for jobs with OCP under the programme that involves 5,800 immediate jobs and 15,000 training positions,” the source said.

Independent news portal Lakome.com reported that employees of a subcontractor that deals with OCP’s subsidiary in the disputed Western Sahara staged a peaceful protest on Thursday in Laayoune mainly to demand their integration as employees of OCP.

An OCP spokesman declined to comment on the Lakome.com report which carried a picture that showed a few dozen protesters, some of whom carried a Moroccan flag.

Morocco, which annexed the desert territory in 1975, has the world’s biggest phosphate reserves and is a key supplier of fertilisers and phosphoric acid.