Morocco World News
Home News Morocco The other Morocco, ‘behind the sun’ 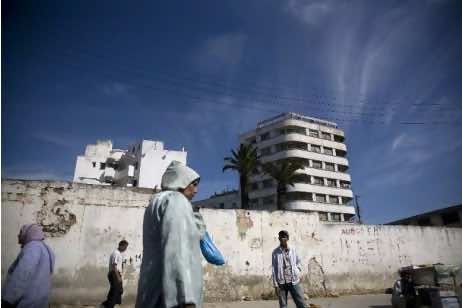 “If you think this is Morocco, you know nothing,” a neighbourhood drifter yelled in the old medina of Marrakech, as he pointed at a fancy car.

“There are Moroccans you’ve never seen, they speak a language you won’t understand, and have a way of life you can’t even imagine. They live behind the sun, in a Morocco you’ve never known,” he rattled on.

Hyperbolic as it is, his statement still serves as an apt portrayal of one of Morocco’s most serious problems: the country’s centre of power is out of step with the regions it governs.

While many Moroccans are happy to live in the kingdom’s big cities, which benefit from the attention of the central government, those in the regions – in the north-east and the south, for instance – are barely keeping their heads above water.

French strategists, more interested in exploitation than in the country’s long-term growth, saw no reason to build infrastructure linking deprived areas to the rest of the Moorish kingdom. Since gaining independence from France in 1956, this so-called “useless” Morocco remains underdeveloped and secondary.

“There were real tensions over power between the monarchy and the nationalist movement – the country’s political and economic elite – after Morocco’s independence,” said Mustapha Qadery, a historical anthropology scholar and author of A Nationalism of Self-Contempt, a book on Moroccan politics recently published in Arabic and French.

“But there was one thing both sides agreed on: the centralization of power was key to ensure control over the state after the French had left. So they adopted the French model, which was based on the idea that ‘there is the capital, and there is the rest’. Never mind that it was the worst government model in Europe,” Qadery noted, speaking on the phone from Virginia State University, where he is currently a scholar in residence.

Predictably, regional affairs could not be properly run from Rabat, the capital. Though the country is not massive, at best, officials did not fully understand the true needs of rural communities and, at worst, did not care about them. This was at a historical juncture where the idea of local government was made to sound like a threat to national integrity.

“Whoever called for regionalism at that critical transitional period was portrayed as a separatist by the nationalist movement, the only class in Moroccan society that thrived under the French protectorate, and wanted to make sure it’ll keep on thriving after France was gone,” Qadery said.

Populations miles away from the centre saw that walis (provincial governors) were not fitting representatives of their interests, given they were not elected and, perhaps worse, were often foreign to the region they were appointed to serve.

So when the country’s constitutional reforms were announced by King Mohammed VI last month, amid justified international media attention, many people in these marginal areas (where illiteracy is endemic) had no clue as to what the fuss was all about. The irony is that, for the first time, a draft constitution in Morocco addressed their situation without too much equivocation.

It reserved a whole section for “regionalism”, a system that “hinges on the principles of independent management” and “ensures the involvement of the concerned communities in running their own affairs”, to quote Article 136 of the draft text

In Ben Guerir, for instance, a small town 50 kilometres north of the city of Marrakech, many of those who voted for the new constitution in a July 1 referendum did not know what the word “constitution” meant.

Khalid Mir, a 51-year-old unemployed local man with a high school education, said on referendum day that he was not going to vote. Sitting with friends next to the cart of an ambulant meat vendor at the local souq, Mir said he took that decision because he did not understand what the new constitution was about.

Nevertheless, the introduction of regionalism in this new and more assertive form has the potential to turn things around. On paper, it carries the promise of bringing public services closer to marginalized communities and galvanizing dormant territories, while alleviating the administrative strain on big cities and blunting rural migration.

On top of that, it has a significant symbolic dimension, according to Qadery, who also teaches a graduate course in French on theories of the state at Rabat’s Mohammed V University. “It marks the country’s reconciliation with its own history,” he pointed out. “State rule in Morocco was premised on the idea of regionalism for centuries, until the colonial period changed that. The country is now taking a first step towards redressing an incorrect situation. The next right thing to do would be, when the time is ripe, to proclaim ‘local governments’; give entities the freedom and the responsibility to fully, not partially, govern themselves.”

For his part, Abdellah Bouano, a Moroccan member of parliament with the opposition Justice and Development Party, described the constitutional provisions under regionalism as “a positive step”. Speaking from the capital, he said a form of economic regionalism started in Morocco in 1974, then took on a political character in 1996. But it was not effective because the heads of regional councils were never truly empowered.

“Only now, with the new constitution, is the region entitled to intervene in a number of sectors that directly impact the local community, and that includes planning and budgeting for human and cultural development, infrastructure, schools, hospitals, tourism and so on,” Bouano explained.

“Before, the region as a territorial entity did not play more than a consultative role in the management of its own affairs; real power was in the hands of the walis, who had the key prerogative to disburse financial resources. Now this power would be vested in elected regional chiefs. The long-term goal is to establish local governments; we’re not there yet,” he added.

There is yet another facet to Morocco’s push for regionalism: the Sahara issue. The autonomy plan proposed by Morocco in 2006 for the Western Sahara, whereby the territory disputed between the kingdom and the Polisario Front would gain independence under the kingdom’s sovereignty, has played a role in making regionalism occupy a more prominent place in the new constitution.