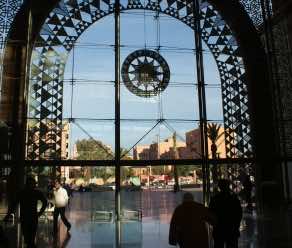 I half-expected Tangier’s railway station to be like an old-fashioned Indian terminus; air rife with spicy smells, frantic ticket kiosks and nearly every open space covered in blankets on which generations of families would huddle amid bulging piles of baggage.

Nothing, however, could be further from the truth.

With its uncluttered, shiny marble floors, small, orderly queues and almost clinically sedate atmosphere, Tanger Ville seems almost too spick and span for a place with as much culture-shock potential as Morocco.

But this gleaming new transport hub is a symbol of the renaissance gripping the country’s previously run-down rail system.

A multi-million dollar cash injection has sparked the construction, or refurbishment, of more than 40 stations with new track and rolling stock leading to faster, comfier journeys and the public is clearly charmed.

A jolt of caffeine and excitement hits me as I sip a cafe au lait and survey Tanger Ville’s electronic departures board which, in French and Arabic, flaunts a series of exotic destinations.

There’s Casablanca, which conjures all kinds of romantic visions from the Bogart movie; there’s Fez (the mythical old heartland of Islamic Morocco) and Meknes (the launch-pad to the Roman ruins of Volubilis).

I’m bound for Marrakech, a city bathed in its own magical allure and find myself humming the words to Crosby, Stills & Nash’s classic folksy tune The Marrakech Express.

Released in 1969, it’s infused with a hippyish, Woodstockian vibe and includes such verses as: “Looking at the world through the sunset in your eyes, travelling the train through clear Moroccan skies, ducks and pigs and chickens call, animal carpet wall to wall.”

There are no ducks, pigs or chickens (or hippies) aboard today and animal skin plays no part in the decor. The train is clean and functional, rather than shiny and super-modern, and is split into two classes – both air-conditioned.

Marrakech in one fell swoop is more than eight hours away, so I’m splitting the journey with a long, lazy lunch in the capital, Rabat.

From the artsy seaside town of Asilah, we jerk inland, through mist-strewn olive groves and sparse green countryside, and plough a fairly bland furrow for a few hours before heading back to the coast.

There are no postcard views but it’s absorbing.

Two local women (one in her 20s, the other in her 40s) are talking animatedly about the uprisings across North Africa and the Middle East. Pointing to dramatic photos in their glossy magazines, they ask me, in French, what I think. I’m soon engulfed in a conversation peppered with Arabic, French, English and Spanish (which we can all speak a bit of).

The older woman works for the UN’s food relief program, her job taking her out to rural Morocco to improve the diets of malnourished children.

She doesn’t reach these far-flung spots by rail, though. While things have come a long way since the late 19th century when the first line stretched 600m from a sultan’s palace to his garden, the country still only has 2000km of track. Spain, a similar size, has 15,000km.

Several places that aren’t covered by ONCF, including gorgeous towns like Chefchaouen and Essaouira, are linked by Supratours’ deluxe coaches, yet hundreds of towns and villages remain well off the beaten track, as speed, rather than widespread connectivity, tops the agenda.

For example, a new two-track line with double-decker trains has cut journey times between Casablanca and Fez by 70 minutes to 3hr. 20min.

By 2015, French-built TGV Duplex trains, running at up to 320km/h, will link Tangier and Casablanca and in the most ambitious scheme, by 2030 the 700km from Tangier to Agadir, the main beach resort on the mid-Atlantic coast, will be covered in just four hours.

More pie in the sky is a 40km line under the Strait of Gibraltar, linking Morocco and Spain.

“We’ll believe that when we see it. We’ll probably be dead by then,” chuckles the UN woman.

Rabat is an attractive city with palm tree-lined boulevards and leafy squares edged by alfresco cafes. Although it’s been the capital since independence from French rule in 1956, it’s never taken off as a tourist hotspot, despite its rich history and ruins and monuments dating back to Phoenician, Roman and Almohad dynasty eras.

Across the Oued Bou Regreg river is Sale, a thriving port and pirate lair in the 17th century. Daniel Defoe’s Robinson Crusoe was captive here before escaping on his epic voyage.

Conversations in French, rather than Arabic, dominate the next section. Marrakech has a thriving expat scene, with the French still madly in love with their former colonial outpost.

I speak to a 30-something Parisian who has a hotel in Marrakech. We chat about politics, culture, sport, tourism and the train.

As we pull into Casablanca, he adds: “Today it’ll take us four more hours to get to Marrakech; in a few years, on a new TGV train, just one hour. Amazing, hey?”

If Tanger Ville was a symbol of the new Moroccan railways, then plush Gare de Marrakech is its poster boy.

It houses a dozen or so smart cafes, shops and restaurants and has a phenomenal entrance, which is modelled on the elaborately-designed gates of Marrakech’s old medina.

Purists and the nostalgic may be dismayed that a gritty old network has embraced modernity, but for most, rail-wise Morocco is definitely on the right track.