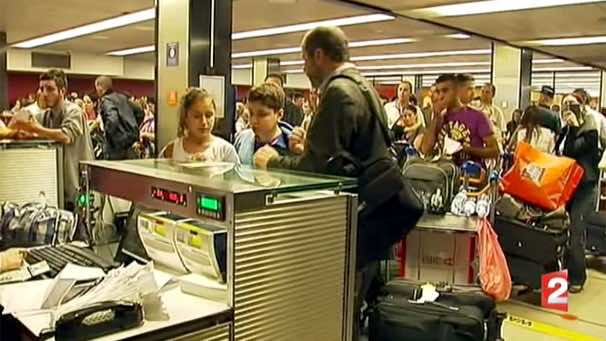 ALGIERS  – Cabin crew with Algeria’s state-run airline were on strike for a fourth day on Thursday, forcing the cancellation of flights and leaving thousands of passengers stranded on both sides of the Mediterranean.

Algeria’s government was trying to lease aircraft and laying on extra ferries to clear the backlog from the strike at Air Algerie, which happened during the peak season when thousands of families cross between Algeria and France to visit relatives

Riot police intervened to calm furious passengers in France’s Marseille Provence airport earlier this week, and there were angry scenes too at Houari Boumediene airport outside the Algerian capital on Thursday.

Hundreds of passengers were milling around the terminal trying to find information about their flights. Many had been waiting for days for connecting flights and some sat exhausted on the terminal floor or on staircases.

“There is no information, there is nothing, it’s a big mess,” said one woman, who had been visiting the western Algerian city of Oran and was trying to get back home to France.

Union officials and striking cabin crew staff said airline managers had not been in touch about a deal to end the strike.

“We are, of course, open to dialogue. We have always been in favour of negotiations,” Yacine Hammamouche, leader of the trade union that represents Air Algerie cabin staff, told Reuters.

“We have submitted our demands but we are still waiting for their answer … We demand a pay rise, improvement of professional conditions and separate management for our department,” he said.

The strike is the latest in a series of protests by government employees in Algeria, an energy producing former French colony, since the start this year.

The government is worried that any strikes could spill over into the kind of protests which ousted leaders in Egypt and in Algeria’s neighbour, Tunisia.

Analysts say that as a result the government has been handing out substantial pay increases to settle industrial disputes, a policy which in turn has encouraged workers in other sectors to go on strike.

In the dispute with Air Algerie cabin staff, Prime Minister Ahmed Ouyahia said the government was keen to see a swift resolution.

“The government has done its duty by first giving necessary instructions for Air Algerie to charter the maximum number of aircraft and by giving permission to foreign companies to provide … extra flights,” he was quoted as saying by the official APS news agency.

“The government calls for the opening of dialogue with the workers within strict respect of the law,” Ouyahia said.