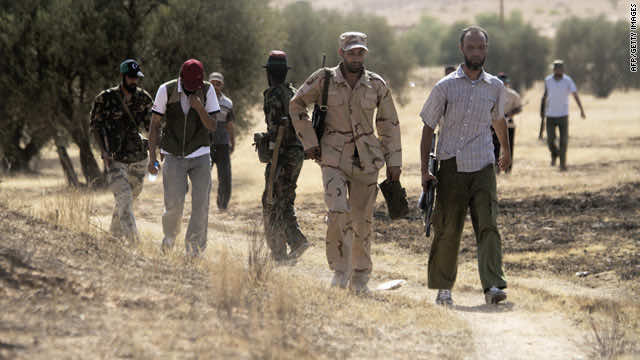 The New York-based Human Rights Watch said that, in “four towns captured by rebels in the Nafusa Mountains over the past month, rebel fighters and supporters have damaged property, burned some homes, looted from hospitals, homes, and shops, and beaten some individuals alleged to have supported government forces.”

The accusations came as rebel forces inside Libya managed to retake a village from Libyan leader Moammar Gadhafi ‘s forces, and rebel leaders were in Europe meeting with NATO officials and the European Commission.

Mahmoud Jibril, chairman of the executive board of the opposition Transitional National Council, said the complaints represent only a “few incidents” that “took place in the very early days of the revolution, and we’ve been investigating those cases. We are against any human rights violation whomever is the source of those violations.” Those responsible are “going to be brought to justice,” he vowed.

In the news release announcing the accusations, Human Rights Watch said its representatives had “witnessed some of these acts, interviewed witnesses to others, and spoke with a rebel commander about the abuses.”

“The rebel military commander in the Nafusa Mountains, Col. El-Moktar Firnana, admitted that some abuses had taken place after rebels captured the towns, but said such attacks violated orders issued to the rebel forces not to attack civilians or damage civilian property. He claimed that some people had been punished, but did not say how many people or for what offenses,” Human Rights Watch said.

The group also noted that it has “documented repeated indiscriminate attacks by government forces on civilian areas” and the use of landmines.

Inside Libya on Wednesday, rebels lost and then regained control of Qawalish, a village in the western part of the country.

A CNN crew close to Qawalish witnessed the events, including the rebels’ five-hour battle to retake the village.

Eight rebels were killed and 30 were wounded, according to hospital sources in nearby Zintan.

Qawalish lies along a major north-south highway leading to Tripoli, which rebel leaders say Gadhafi forces have been using to bring in arms from other parts of Africa. The rebels want to cut off the supply chain.

A rebel commander told CNN his forces would advance another 10 km (6.2 miles) and then stop, because they do not have enough fighters and ammunition to go farther. Reinforcements were heading in.

Almost all civilians had already fled the area around Qawalish.

NATO Secretary-General Anders Fogh Rasmussen issued a statement Wednesday after what NATO called “an informal meeting” with members of the Transitional National Council in Brussels.

“The members of the Transitional National Council thanked us for the mission’s indispensable humanitarian role,” he said. “And they briefed us on their vision of their country’s future — one based on democracy, the rule of law and respect for human rights.”

Some rebel leaders in Libya have criticized NATO for not doing enough to halt Gadhafi’s forces.

Rasmussen said the two groups agreed “that NATO’s operations to protect civilians must continue. Gadhafi’s forces are still threatening innocent people. And as long as that threat continues, we must continue to deal with it.”

Gadhafi’s regime “has lost all legitimacy,” and there must be “a political solution,” Rasmussen said, “for the people of Libya — who have the right to live without violence and fear; the right to plan their own future; and whose legitimate aspirations must be met.”

The British Ministry of Defense said British Army helicopters struck Gadhafi troops “engaged in the repression of the civilian population of western Libya” on Tuesday.

In a statement issued Wednesday, the ministry said “Apaches targeted three vehicle check points, which had been located in advance by intensive NATO reconnaissance operations and were being used to prevent free movement by local people. At each check point, military vehicles and structures were identified and successfully engaged using Hellfire missiles and cannon fire, as well as infantry positions. In total, four military structures and seven vehicles were destroyed, including at least one multiple barrelled rocket launcher.”