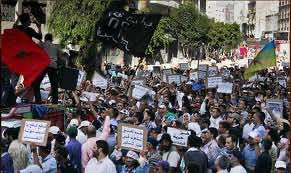 WASHINGTON — Morocco is moving forward to implement the new Constitution adopted in its July 1 national vote, which is “a real charter of fundamental rights and freedoms and participatory democracy,” said Driss El Yazami, President of Morocco’s recently established independent National Human Rights Council (CNDH). El Yazami visited Washington, DC this week to discuss the Constitutional changes with U.S. officials, human rights groups, and legal experts. He urged reform advocates to support Morocco’s efforts to strengthen democratic rights and the rule of law, which may offer a positive example for the region.

“The Moroccan people and King Mohammed VI have shown they have the will to change, and our new Constitution gives us the roadmap,” said El Yazami, who spoke at forums at the German Marshall Fund and American Bar Association (ABA). He said CNDH is already planning workshops to educate law enforcement personnel and other public employees on rights protections adopted in the new Constitution. He also cited progress in establishing an independent judiciary. El Yazami emphasized, in a Washington Post interview, that “the rule of law needs citizens claiming their rights and applying the law.” He urged citizens and political leaders to exercise the new power afforded them. In October, Moroccans reportedly will go to the polls to elect members to a newly strengthened Parliament.

Praise and support for Morocco’s reforms continues from world leaders—including the United States, European Union, France, England, and Spain—as well as international human rights groups and other NGOs. In a statement to the press, Amnesty International said the reforms are an “important step in the right direction.”

David Kramer, President of Freedom House, said King Mohammed VI “deserves great credit” for answering calls for change with reforms that are “a positive step forward” and “received a resounding vote of approval.” He said “no other Arab monarchy has taken such serious steps,” which is “why Morocco’s example is so important.”

Claude Zullo, Senior Advisor of the ABA’s Rule of Law Initiative, said Morocco’s Constitutional changes “represent a significant opportunity to advance the reform agenda” and have “broader implications across the region.”

Leila Hanafi, Attorney and Programs Manager with The World Justice Project, praised Morocco for the “major improvements in its legislative framework and judicial reforms.” She said the country’s “biggest challenge will be regulatory enforcement and implementation,” and “engaging young people in the law-making process.”

El Yazami said he is encouraged by a new “social dynamism” reshaping Morocco, notably among women and youth asserting their rights. He agreed that “significant challenges” lay ahead, including enacting new legislation with broad public input, and creating job opportunities and training for the large number of youth. He credited peaceful demonstrators this spring with helping to expedite reforms. “Constructive criticism is important,” he said, “but we also need support and encouragement from reformers in the U.S. and elsewhere.”

Professor I William Zartman, Prof. Emeritus at Johns Hopkins University, underlined that “reform in Morocco was underway well before the Arab Spring,” and in fact began more than a decade ago, including Morocco’s 2004 Family Law revision to strengthen women’s rights, and its 2006 Truth and Reconciliation Commission.

“The Moroccan people and their King have made a courageous statement,” said Edward Gabriel, former U.S. Ambassador to Morocco. “Against a backdrop of continuing regional turmoil, Moroccans cast a decisive vote to move forward—peacefully. The U.S. has long held Morocco to a higher standard, as a close partner for more than 200 years. Now is the time for those who advocate reform to step up and offer constructive actions as well as words. Helping Morocco set a positive example in the region is very much in America’s national interest.”