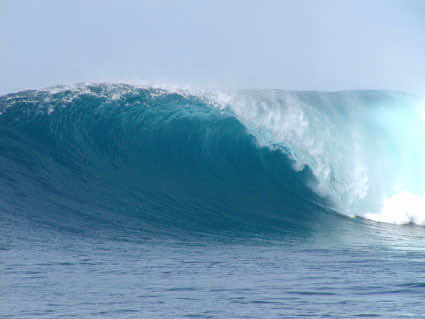 Our group landed at the Agadir airport at dusk and drove south for more than two hours along two-lane roads, through tiny Moroccan towns filled with mud puddles after recent rains. At Mirleft, we turned off the coastal road into the town — a grid of a few dirt streets lined with low white- and turquoise-painted cinder-block buildings.

We drove up a hillside road as rutted as a dry riverbed, past flocks of wandering sheep and locals riding donkeys sidesaddle. The glow of soft lights behind a tall arched entryway suggested that we had made it to our inn: Les 3 Chameaux, a nearly decade-old bastion of style in what had once been a French colonial fort from the 1930s.

A series of colliding impulses had led us to this wild strip of Moroccan coastline and the village of Mirleft: the call of sun and sea, the allure of this cool bed-and-breakfast inn, and the appeal of soaking up the exotic vibes thrown off by the cohabitation of cultures — surfing and Islam — in a place that feels like the edge of the Earth.

In the 1960s, when Western hippies discovered Morocco, they camped along the country’s southern Atlantic beaches, which ended at Mirleft. Locals enthuse about how Jimi Hendrix (Morocco tourism’s George Washington for all the places he is alleged to have slept), staying more than 200 miles north in Essaouira in 1969, grooved on Mirleft, then a mere collection of Berber fishermen’s houses.

Since those days, the world and southern Morocco have changed dramatically: Essaouira is a major tourist spot lined with condos and hotels, and Agadir (about 90 miles north of Mirleft) has grown into a center for modern vacation villages. That leaves Mirleft as one of the few remaining places on the southern coast with wide open spaces and a laid-back aura. Meanwhile, in the past decade, a Moroccan surf scene has blossomed, supported by French surf associations that have spread the word of the wave to North Africa.

Mirleft is now a hip destination favored by affluent classes from Marrakech, European artists and musicians and an international set of surfers, paragliders and trekkers. Tasteful and sometimes luxurious B&Bs are sprouting along the coast, and as investment has poured in, it has brought the first modern conveniences, such as street lights and an ATM, to a town where the preferred modes of transportation are still donkeys and jangly old mopeds. And despite an April terrorist bombing in downtown Marrakech that killed 15 people, the relatively remote Mirleft coast has reportedly experienced an increase in tourism over 2010.

For the French, Morocco (a former colony that achieved independence in 1956) is a prime vacation spot in the sun. When French friends and Morocco-philes (including my 16-year-old son’s best pal and surfing buddy) invited my family to join them on a winter trip to warm southern Morocco, Mirleft quickly rose to the top of our list.

Spread over about three acres enclosed by traditional red mud wall fortifications, Les 3 Chameaux still feels like what it was originally built to be: a colonial outpost combining Moroccan architecture with modern European comforts. The large guest suites have traditional ochre walls and rustic tile floors and are fitted with a mix of antique and modern furnishings. My wife and I slept in a suite that once served as the local post office.

Gravel and dirt paths lead through gardens of bougainvillea and climbing roses. The deck next to the heated swimming pool provides a panoramic view of the nearby foothills of the Anti-Atlas Mountains.

The hammam and massage rooms are located in what was once a prison. In the main building, we enjoyed about the only cocktails to be found in Mirleft and then were served candlelit tagine dinners accompanied by Moroccan red and rose wines.

Adding to the aura are the little touches of rusticity — the irregular water pressure, the lack of electrical outlets in the bathroom and the funky propane space heaters for the evenings when the temperature drops — that remind you that you’re a long way from Casablanca.

In the morning, we awoke to a Moroccan breakfast of crepes, jams and honey, fruit, yogurt and tea. As we ate, we took in the generous views over the town, its mosque towers and the breaking waves of a nearby inlet. Our fellow guests were mostly outdoorsy Europeans who wore serious trek wear in combination with exotic duds: cotton print pants from Nepal or Arabian scarves.

Behind us climbed red hills, covered with a low growth of prickly pear cactus, wild thyme and the occasional argan tree, from which Morocco produces its prized cosmetic oil. On a taller hill to our southeast stood the dilapidated walls of an older turn-of-the-century French garrison, silhouetted against a blue sky by the morning sun.

Jean Francois Bouquillon, the white-haired French hotelier who opened Les 3 Chameaux in 2002, introduced himself, explaining that when he took over the place a decade ago, it had fallen into abandon, and the village was a fraction of its current size.

“Ten years ago, none of these buildings were there,” he said, waving his hand at the creeping line of white cinder-block structures working their way up the hill.

That first day, we climbed into our rental cars to explore the coast, a collection of rolling hills and sharp cliffs that fall to the ocean, forming inlets with sand beaches that were desolate in winter. A wind blew off the ocean, making it feel slightly chillier than the morning winter temperature of the high 60s. The region offers a temperate climate with highs that range from about 70 degrees in winter to the low 80s in summer, at the height of tourist season.

We headed south about 13 miles to Legzira Beach, with its dramatic wind- and surf-beaten red rocks carved into evocative shapes and immense natural arches. Here, at a favorite lunch spot for paragliders — as evidenced by the photos that decorated the walls — we sat on a terrace and ate fresh grilled fish and fries downed with the ubiquitous sweetened mint tea.

The boys were itching to surf, and by the second day the rest of us were willing to put more than our toes in the water, although none of us had been near anything more than a foam body board since our childhoods.

We began the following day at a surf shop run by a local surf school. The two boys — veterans of several summers in Biarritz — had brought their own wet suits. The parents — except for my wife, who is allergic to public humiliation and was content to watch — were fitted with slightly frayed rubber suits that we stuffed ourselves into like so much sausage meat.

We were joined by two other families with younger children — one French and one American. The Americans, from Seattle, had come to Mirleft on the recommendation of the owner of a riad they’d rented in Marrakech.

Boards and coolers containing lunch were loaded onto a 4×4, and 15 of us plus two surf instructors caravaned more than a mile and a half south of town to the main surf beach, known as la plage sauvage. As the name implies, the beach was indeed wild. For one thing, there’s no road sign that points you there. Nor does any road take you there, for that matter.

We turned off the coastal two-lane onto a rocky plateau and continued toward the sea to the edge of a cliff. There, on a dramatic perch overlooking the coast, was a well-stocked camper belonging to a foursome of young German surfers, two men and two women whom, over the course of a couple of days, we never saw surfing. We always found them in the same position: taking in the views while snacking and drinking something poured from a thermos.

Getting to the beach required hiking — with our boards, towels, food, water and other supplies — down a fairly steep rocky trail that switched back and forth along the cliffside. About midway down the trail, a large hippie totem came into view on a plateau about 20 feet above the beach: White and blue painted rocks formed a large mushroom flanked by a peace symbol.

The boys discussed the wave patterns and took off on their own down the shore with warnings from their moms about staying close by. This spot is a relatively calm one, with beach break waves that were up to about five feet that day, while about 50 yards or more offshore, the waves seemed to stretch to twice that size.

We novices stayed with our main instructor, Kareem, a tall Casablanca native and professional competitive surfer of about 30, with patient eyes and demeanor, who would teach us first how to ride a wave on our bellies before attempting to get us upright.

I won’t bore you with the details of what I learned on my first day on a surfboard in more than 40 years. Or tell you of the awkwardness in catching a wave that dropped me and my surfboard onto the backside of one of the moms in our group. I suppose it’s a truism that after a certain age, starting a new sport is hard, and it’s probably a good idea to stop after lunch. The women in our group did just that, heading to the provincial capital Tiznit, 23 miles inland, for an afternoon of shopping and bargaining for silver jewelry.

While the boys calmly rode the waves that afternoon, their dads ended up hurting themselves. I pulled something in my lower back that made getting up the hill seem like a peak ascent and getting into the car like advanced yoga, and later turned what was supposed to be a relaxing massage at Les 3 Chameaux into near torture. For the next three days, I swallowed the maximum dose of ibuprofen, which I had fortunately packed as a precaution.

On our last morning in Mirleft, while the boys slept, we adults headed across the mountains for the Saturday morning camel market in Goulimine, at the edge of the Sahara. I believe someone told us that the 50-plus-mile drive took about an hour and a half, but there’s another truism about travel in Morocco: It always seems to take at least one hour more than you expect to get where you’re going.

By the time we returned that afternoon, we were dusty and road-fatigued from hours in the car, the ordeal of finding the camel market, convincing a Saharawi trader that we didn’t want to buy one of the beautiful live camels (or goats, sheep, or cows for that matter), and then getting out-negotiated by him on some of the beaded baubles he was also hawking. (“Put what you like in the bowl and the price will come to my head,” he’d said. In the presence of the magic bowl, we didn’t bargain enough.)

Back at Les 3 Chameaux, my son and his pal, Louis, were wrapping up a lunch of grilled fish on the terrace after a morning of surfing. They poured tea from a silver pot and leaned back into the sun. I wished I’d stayed behind with them and “chilled,” as my son would put it.

Louis’ mom asked the boys about the morning’s “activity.” Fixing her with a blank adolescent stare, Louis replied that surfing is not an activity.

Camuto, a writer based in France, is the author of “Palmento: A Sicilian Wine Odyssey.”