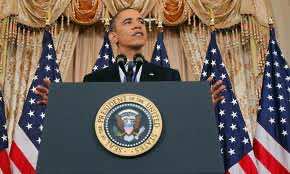 Earlier this week, the leading polling firm Zogby International released its report “Arab Attitudes, 2011.”  The most striking of its findings were survey results that showed the favorability ratings of President Obama and the United States across the Arab World have declined sharply since 2009 and in most Arab countries have even fallen below 2008 levels in the last year of the Bush administration.

The poll surveyed 4,000 citizens in six Arab countries: Morocco, Egypt, Lebanon, Jordan, Saudi Arabia and the United Arab Emirates. For example, in Egypt, favorable attitudes towards the United States fell from 30% in 2009 to 5% in 2011 with 95% of Egyptians possessing a negative view. In Morocco, the perceived favorability of the US had fallen from 55% two years ago, to 12% in 2011. A similar trend was observed in the other countries surveyed. With the exception of Lebanon and Saudi Arabia, favorable attitudes towards the US were all lower in 2011 than in 2008.

The poll also revealed Arab perceptions about which issues pose the greatest obstacle to peace and stability in the Middle East. Ranking number one was the “continuing occupation of the Palestinian territories.” Number two was “US interference in the Arab world.” Likewise, the US ranked slightly worse than Iran when it came to the perception of being a force for peace and stability in the region, with neither country ranking particularly high.

Why is this the case? Why after a positive spike in 2009, in the first year of Obama’s presidency, has the perception of the United States fallen below Bush-era levels? What actions taken by the United States since 2009 could have produced such a backlash? According to the esteemed pollster, James Zogby, much of this decline has to do with the Arab world’s high expectations for an Obama presidency after eight-years of the policies of George Bush.

As the United States first African-American President, whose campaign had been spearheaded initially by his opposition to the Iraq War and a campaign slogan “Change we can believe in,” the Arab world was excited about the prospects of a break from the past. Expectations were further elevated after Obama’s speech in Cairo, less than six months into his presidency, pledging to improve US-Arab relations. It even included a call for a stop to Israeli settlements. The last time there was such a call by an American president it was during the administration of George Bush Sr. in 1991.

However, as Zogby explained earlier this week on CNN, by 2011, the expectations of Arabs have not been met, “and therefore this deflation and a sense of let down and disappointment across the region,” creating the even more negative poll results for the US than in 2008.

However, for most Americans, the claim that Obama has let down Arab expectations may seem unfair. On Iraq, US troops are coming out. Certainly that is a lot better than his predecessor who invaded the country on mistaken pretenses at best. The discourse has changed when it comes to the “War on Terror”; in fact the Obama administration no longer uses this controversial description. Likewise, the strong-armed ruler Hosni Mubarak of Egypt, long propped up by the United States, has been ousted by pro-democracy protestors. Furthermore, President Obama’s speech in May, just two months ago, expressing support for the democratic aspirations of Arab peoples, was touted as far reaching and progressive by much of the American media for its calls that a Palestinian State be based on the 1967 borders. Supposedly, no US president had ever made such an explicit endorsement that a Palestinian state be based on the 1967 borders.

But for the Arab world, contrary to characterizations by the American media, the United States approach towards resolving the Israeli-Palestinian conflict has hardly changed. The Arab League endorsed a two-state solution based on the 1967 borders, for example, in 2002 and this has long been the understanding of the basis of a peace settlement among the international community, including the US. After lifting its demand that Israel cease settlement activities, the US has fallen back to refrains of previous administrations that the parties return to “negotiations without preconditions;” an approach that for the past 18 years has proven unsuccessful in resolving the conflict. According to the survey results, it is Obama’s handling of the conflict where he received his worst ratings. Interviewed by the conservative online news site, Newsmax, Zogby claimed that the Israeli-Palestinian conflict “has become the core issue, almost the defining issue in the relationship.”

To the credit of President Obama, according to Zogby in the Washington Post, when they spoke recently and he told the President about the survey, Obama predicted his ratings would not be positive because of the impasse over the Israeli-Palestinian conflict. “He got handed the shovel that his predecessor had been using to dig a deep hole, and holes all over the region. Getting out of those holes has been very difficult,” stated Zogby on CNN.

If the United States is to improve its relationship with the Arab world, Zogby’s latest survey reminds Americans once again on the need to muster the political will to pressure Israel to reach a fair solution with Palestinians and address this major cause of resentment towards the US. Until then, the broad anti-Americanism and negative sentiment that have existed across the region will continue, regardless of who is president of the United States. A part two on more findings from the Zogby poll is due to be released in two weeks.

Benjamin Villanti has been part of the United Nations community in New York since 2005, working in both public information and political analysis. He is a contributor to Morocco World News.